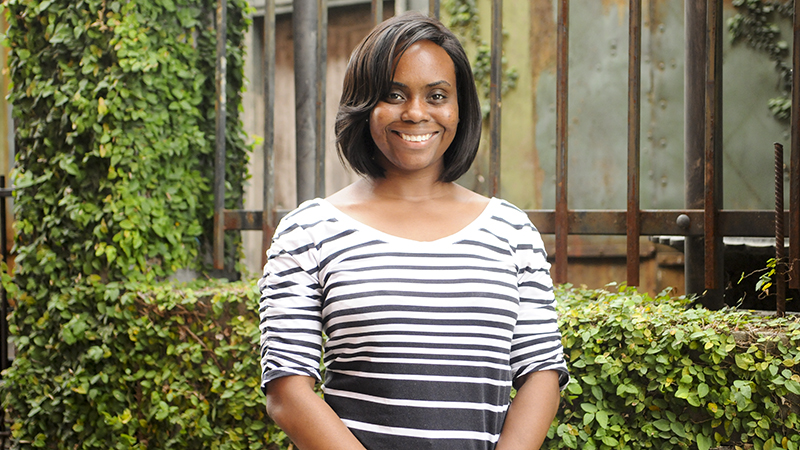 Ashlyn Goodwin poses for a photo Wednesday in downtown Selma. Goodwin is the volunteer of the week. (Blake Deshazo | Times-Journal)

Working with and mentoring the youth is near to Ashlyn Goodwin’s heart.

However, her work with the local youth does not end there.

She credits the support and leadership of some of her former mentors for the woman that she is today and uses the guidance those women gave to her as her blueprint for mentorship.

Since graduating from Tuskegee University, Goodwin moved back to Selma, working with some of those same women that mentored her so many years ago.

“It’s a surreal experience because now I find myself working along side a lot of the women that helped me matriculate through school,” she said. “I am honored to give back in the way that those women gave to me.”

Goodwin has been active with the YMCA since she was 4 years old and even learned to swim in one of their programs.

She said no matter where she is or has gone she tries to connect with the local YMCA in that community.

“The Y was a pivotal part of my life as an adolescent,” she said. “It was a big part of me and who I am and I just don’t see not being a part of YMCA.”

As a former Leaders’ Club member Goodwin connects with the students by sharing some of her own personal testimonies of her times at the Y.

“I can speak from experience and just share my journey to the Leaders’ Club,” she said.

Associate executive director for the YMCA of Selma- Dallas County Dr. Denisha Hendricks said Goodwin’s passion for the local YMCA is driven by the influence it has had in her life.

“She has a true passion for the Y and the Leaders Club’ because of what it has done for her,” she said.

Hendricks said adding Goodwin to the Selma-Dallas County YMCA has been a big help, not only to the entire YMCA, but to the Leaders’ Club specifically.

“We had a little down time in our participation, but this year we’re really excited,” she said. “[Through Ashlyn’s] efforts with the leadership club and getting them involved our numbers are up.”

She said Goodwin has brought genuine love and care for the programs, youth and the center and that they are all grateful to have her.