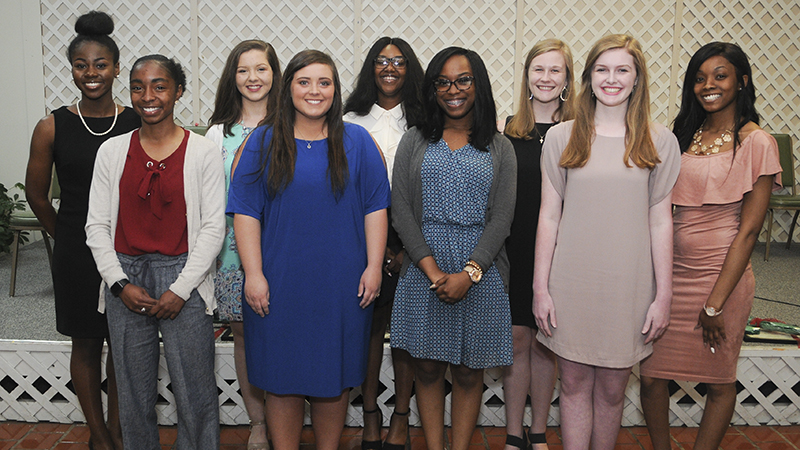 Nine young women from Dallas County were recognized Tuesday night during the Academic Achievement Award Program, which is formerly known as the Girl of the Year.

The program was put on by the Alpha Omicron Chapter of Delta Kappa Gamma International, which is a society of educators.

“People seem to think we don’t have a good educational system here, but our children compete very well,” said Carolyn Dunaway, a member of the society. “This is a way for other people to see that the kids in our community do have an opportunity to learn and excel academically.”

With family, friends and supporters seated in the audience, members of DKG introduced each young woman and bragged on their academic success.

In the past, one girl was named the Girl of the Year, and one girl from each school received a scholarship as well, but two years ago DKG decided to change the name and format. The new program awards more scholarships to more young women.

This year, Delta Kappa Gamma was able to give out a total of $3,700 with $500 awarded to each first place recipient and $300 to each second place recipient. A total of nine girls were recognized from five different schools.

“Growing up in Selma, I always heard of the Girl of the Year program, and now that they’ve changed it to the Academic Achievement Award, I was just honored to be recognized as one of the most academic achieving girls in the county,” she said after the ceremony.

In the fall, Scheer will be headed out west to attend Texas A&M University, where she will study chemical engineering.

“I am so thrilled. I made my decision about two weeks ago, and it’s the best decision I’ve made so far,” Scheer said.

Briana Newberry, who won first place for Selma High School, was honored to be recognized. She plans to attend college at Springhill University and study biochemistry.

“I’m just honored to receive this scholarship and want to thank the Delta Kappa Gamma,” she said.

Newberry also plans to double minor in forensics and psychology. She hopes to one day work as a forensic toxicologist.