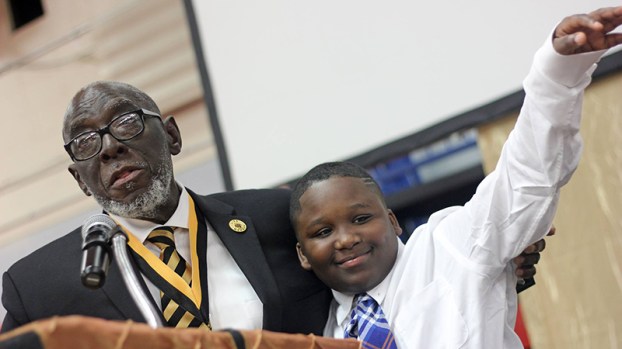 The Black Belt Alphas, headed by Billy Young, were an organization that only had seven members that were dwindling out eight years ago. However, thanks to the work of Young, Charles Johnson and other Alphas, they were able to turn their chapter around. They now have 33 active members in the fraternity and have enough community support to throw events benefiting the community all year long. Now in the eighth year of the banquet, the event has grown so large that they had to move it from the St. James Hotel to the auditorium in Wallace Community College Selma and had almost 100 sponsors.

According to Charles Johnson, chairman of the Delta Pi Lambda Foundation, the banquet serves three purposes: providing a fun night where residents can dress up; the raising of money for the Black Belt Alpha’s operations; and the handing out of scholarships/honors to deserving youth and businesses from the Selma-Dallas County area.

According to the Alphas, the banquet is one of the largest-attended events of the year for Selma. With the banquet serving as a partnership for the Delta Pi Lambda Foundation and the Black Belt Alphas, members from both organizations

“People didn’t want to go home. We almost had to push people out the door It was a good social outing,” Johnson said. “We had individuals come from all over the Black Belt.”

The banquet this year handed out scholarships to graduating seniors from Selma, Keith, Southside, Francis Marion and R.C. Hatch High Schools. The winners are listed as follows:

While the scholarships are something they do every year, they decided to do something special for Concordia College Alabama for 2018.

CCA, which is closing its doors permanently after this semester due to financial issues, had eight students chosen as the recipients of $250 book scholarships they can use at their new universities.

According to Young, the Alphas were saddened to hear about the school’s imminent closure, but wanted to do what he could to contribute while there was still time.

“It is so devastating to those students, so we wanted to do a little something for ones that are going to college,” Young said.

Additionally, four local businesses were honored. These businesses were acknowledged for their success in the Selma-Dallas County Area and residents were encouraged by the Black Belt Alphas to support these local venues. Businesses honored are listed as follows:

Two distinguished Selmians were also honored for their work in their field and in the community:

According to Young, this is the only fundraising event they have all year, but they usually do very well. More than $10,000 was awarded this year.

Moving forward, Johnson said more good things are to follow for the organization. Benefitting the community in a variety of ways, he is confident in all of their abilities.

“We are a force to be reckoned with,” Johnson said.

First Responder of the Week: Richardson serves as bailiff and volunteer firefighter

Lorenzo James Richardson has been working for the Dallas County Sheriff’s Office for 16 years, but has been serving as... read more