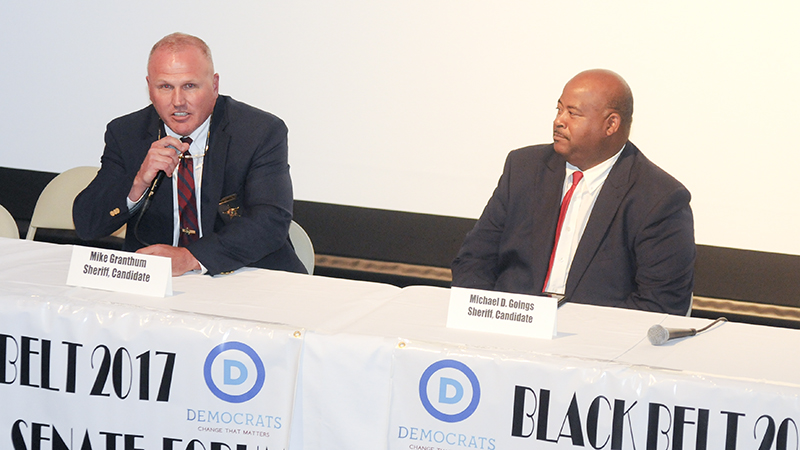 State and local Democratic party candidates spanning five offices along with interested audience members gathered inside Selma’s Walton Theater Monday for a public forum put on by the Dallas County Democratic Executive Committee before the upcoming primary election on June 5.

The forum, part of Selma and Dallas County’s political atmosphere for many years, serves to provide residents with a better understanding of what each candidate stands for. The forum is not designed to work like a debate with arguments and counter-arguments but rather for the audience to steer much of the conversation.

However, there was still a moderator, Labaron Mack,  to help keep things moving.

With so many candidates, chairperson of the DCDEC Syenethia Pettaway said they saw a need to divide the forums up on two separate dates.

For the forum taking place Monday night, the positions of Alabama Senate District 23, Alabama House District 67, Dallas County Sherriff and Dallas County School Board Districts 2 and 3 were in the spotlight.

On May 8, the DCDEC will host another forum with candidates for Dallas County Probate Judge and Fourth Judicial Circuit Clerk.

With a large number of candidates for different offices, many of the audience members came with a variety of concerns for issues they wished to see discussed.

For Ward 7 Councilwoman Jannie Thomas, her largest concern was infrastructure, such as potholes in the streets or the city’s capital equipment.

“I am worried about the infrastructure and the safety of this town. Because, as you see, it needs some work. I want whoever wins to be willing to work together, improving things here in Dallas County,” Thomas said. “I’m hoping that we will get some people in a position who will be able to do what they say.”

With more people like Thomas present at the event, each with their own individual drive to have their questions answered, many candidates took to their own methods of preparation.

Incumbent for the Alabama House of Representatives District 67, Prince Chestnut, had pages of scribbled notes of pieces of legislation he sponsored, topics he wished to pursue in the forum and other bits of information to guide him while speaking to the audience.

Robert Green, who will be participating in May’s forum as a candidate for Probate Judge, made sure he was in attendance for the event, knowing that he could get a better sense of the audience rather than going in blind.

A self-described veteran of multiple forums, Green has a good feel on what he is looking for, and cares about what is on the audience’s mind.

“I wanted to get a grasp of the concerns of the residents of Dallas County. They have issues they want to address, and this helps me prepare,” Green said.

The forum took place in the form of opening statements of around three minutes, followed by responses to questions from the audience and a quick two-minute conclusion speech.

For the Dallas County School Board Districts 2 and 3, the same questions were asked to both sets of candidates. A couple of the main topics discussed in the forum were the improvement of Dallas County Schools in the technology age and the growing local and national concern over school safety.

“The parents are around from first to sixth grade, then all of a sudden they get to middle school and they are forgotten,” Solomon said. “We must assess our information better so we understand what is going on.”

For the Alabama Senate and House of Representatives, much of the conversation was centered around ways to bolster the economy, as well as ways to improve our schools. After long-time incumbent Hank Sanders decided to step down from the Senate race, Malika Sanders-Fortier is running unopposed.

For the state House of Representatives, incumbent Prince Chestnut is running against Jelani Coleman.

The intrigue over the forum reached all the way to Alabama’s race for governor, as candidate James Fields took time out of his schedule to come to the event.

Somebody who expressed his concern for the weakest among Alabama in front of the Walton audience, Fields understands the importance the local level of community has on the foundation of the state.

“The government does not produce communities. Communities produce government, and we must keep all of our communities growing stronger,” Fields said. “I am here today because I care. Wherever we can be to show we care, we are there.”

Other than a few small disturbances, Mack was able to keep the program running smoothly, emphasizing to the audience and candidates alike the importance of respecting each other’s opinions, supporters and time slots.

More information on the May 8 forum will be provided as the date approaches.

For more information about the DCDEC and their forums visit their Facebook page at “Dallas County Democrats.”