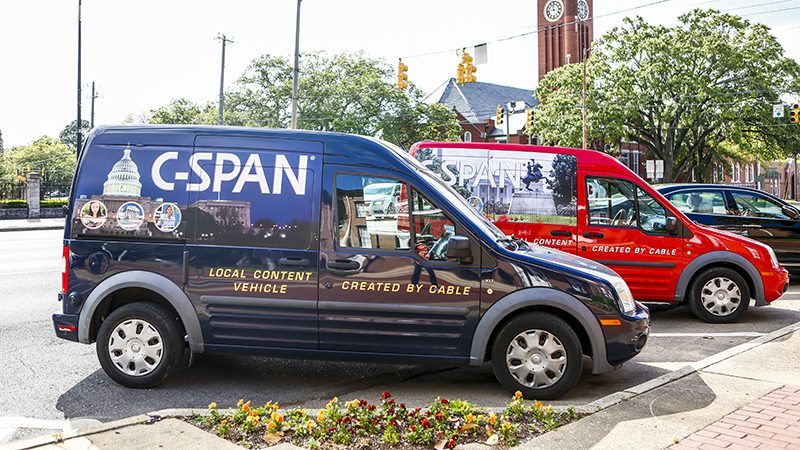 C-SPAN is in Selma this week filming segments as part of its Cities Tour. (Alaina Denean Deshazo | Times-Journal)

A crew from C-SPAN will be in Selma all week filming interviews and segments as part of its C-SPAN Cities Tour.

The tour takes the cable network’s Book TV and American History TV programming on the road to cities with rich history like Selma to highlights history and literary life of the cities it visits.

“It not only introduces America to what makes each city special but hopefully maybe teaches you something about your own community as well,” said producer Ashley Hill during a press conference at Selma City Hall Monday afternoon.

Hill and the rest of the C-SPAN crew arrived in Selma Saturday and will be in town until Thursday afternoon. While in Selma, they will focus on filming segments on the National Voting Rights Museum, the Selma to Montgomery National Historic Trail, the history of the Edmund Pettus Bridge, the Civil War, and Old Cahawba.

“It’s a big responsibility for our team to tell stories in any city that we go to,” Hill said. “To be able to hear about people who lived through these important events in American history is a responsibility that we have, and it’s an honor that we get to tell those stories.”

C-SPAN will also conduct interviews with Selma Fire Chief Henry Allen on his book “Marching Through the Flame: The Children of Selma Marched Through the Flame and Did Not Burn” and historian Alston Fitts’ on his book “Selma: A Bicentennial History,” as well as local politicians like Mayor Darrio Melton and former Mayor James Perkins Jr.

“Every piece that we shoot while we’re here in Selma is going to air on a special weekend of programming dedicated to your city that will air here on your Charter Spectrum channels and all over the country May 19 and 20,” Hill said.

She said they also plan to visit schools and work with civic groups during their stay.

Melton said the city is excited to have C-SPAN in town and hopes the spotlight on Selma will continue to entice people to visit the city.

“We’re very excited that C-SPAN is in town to highlight Selma. Selma is so known for our history, but C-SPAN is telling the whole story of our history and to where we’re going,” Melton said.