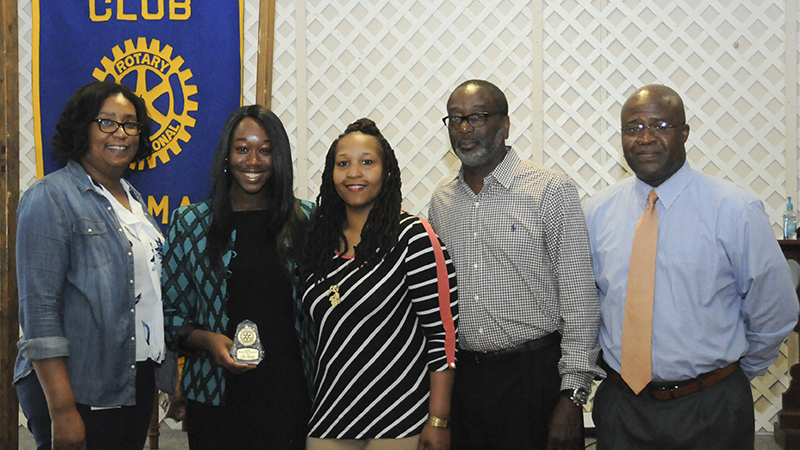 Pictured from left to right are Linda Brooks, Nia Brooks, Jerria Martin, Ralph Brooks and Willie Moore. Nia, second from the left, was awarded a scholarship from the Selma Rotary Club.

It came as no surprise to Dallas County High School principal Willie Moore that Nia Brooks, a senior at the school, won the Rotary Club of Selma scholarship award last week.

“Nia stood out head and shoulders above a bunch of the seniors,” he said. “ I knew coming in as a freshmen that she had leadership skills and she has exhibited that in Dallas County High School.”

Six seniors, one from each local high school, vied for the $1,500 scholarship last week, but in the end the Rotarians chose Brooks as the victor.

Moore said after hearing Brooks’ presentation last week he knew she had won the scholarship.

“I told her parents, ‘she’s the winner.’ No doubt about it,” Moore said.

Each of the students were chosen by their counselors to compete for the award and were asked to deliver a five minute speech to the club on why they deserve the scholarship, how it would help them, their future plans and their service involvement.

“She’s a selfless person,” Moore said. “She comes from a set of parents that are selfless people.”

Rotary Club Scholarship Committee Chair and president-elect Jerria Martin said it makes her happy that principal Moore was so excited to hear that Brooks had won the scholarship.

“It feels so great to know that our young people here in Selma-Dallas County are supported,” she said. “She has a supportive family but even a supportive principal who was just as elated as if I had announced his own daughter had won the award.”

Monday afternoon Brooks, her parents and principal Moore joined the Rotary Club of Selma to accept the first place trophy. The scholarship will be sent directly to Samford University, the school of Brooks’ choice.

Serving her community and staying true to her values are two of the many things Brooks attributes to her personal testimony of success. As a member of Beta Honor Society, Family Career and Community Leaders of America, Future Business Leaders of America and Student Government Association, she has served the community in many facets.

“We do a lot of fundraisers to help give back,” Brooks said. “We went to the nursing home on Valentine’s Day to hang out with them and give them goody bags.”

She said they have been to the police department to give them teddy bears for children that are going through a lot at home.

Brooks currently has a 4.2 grade point average and plans to major in pre pharmacy in hopes of one day becoming a clinical pharmacist.

In her speech, Brooks explained how her hard work, dedication and unwavering faith in God has been the reasons she is excelling academically.

“I have worked very hard to make sure that I am prepared for college by taking the initiative to demonstrate excellence, dominate adversity, discipline myself from distractions and remain determined to never settle for less,” she said.

She went on to say that she is goal oriented and she can do anything she puts her mind to.

“I motivate myself to set goals and work hard,” she said. “I remind myself that can’t does not belong in my vocabulary.”

Linda and Ralph Brooks, Nia’s parents, said they both are proud of her accomplishments and they will continue to support her in everything she does.