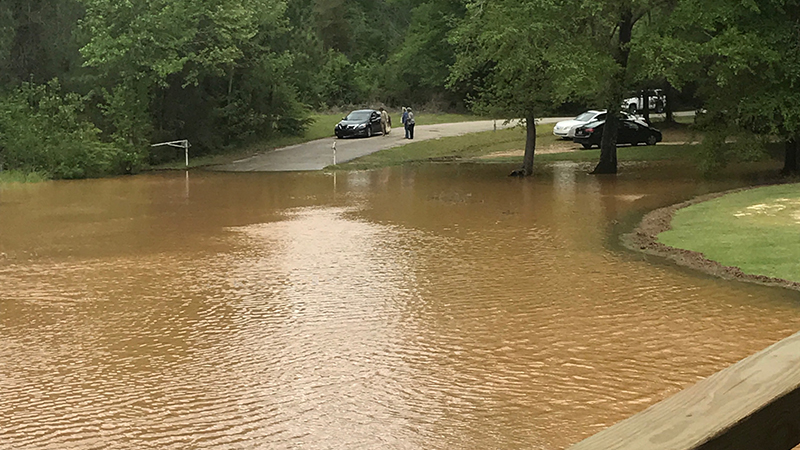 Heavy rains over the weekend affected multiple areas in Dallas County with flooding conditions, including recently-opened restaurant, The Tin Cup.

Next to the Cahaba River, the parking lot and golf course around the restaurant are susceptible to flooding due to excessive rain.

According to Steve and Sybil Smitherman, owners of the restaurant, the flooding was first noticed after the thunderstorms began around 3 p.m. on Saturday.

By next morning, the Smithermans discovered the flooding had risen further after hours of storms led to seven and a quarter-inches of rain. The rain and ensuing flooding from the river led to a parking lot that was impassible for smaller cars.

However, the Smithermans were motivated to continue operations and noticed the flooded area of the lot was still passable for larger pickup trucks.

Described as “Mr. Innovative” by his wife, Steve started ferrying customers over to the restaurant in his truck.

“I was trying to salvage all that I could,” Steve said.  “I lost a few of them because they would get up to the parking lot and turn around before I could pick them up.”

The flooding may have slowed down operations, but the Smithermans say they were still able to retain about half of their usual business.

They could have retained even more if it hadn’t had been for continuously rising flood levels, which forced Steve to close the doors at 6 p.m. Sunday, three hours earlier than normal. They were not open Monday, either.

“You got to do what you got to do, and Stevie did the best he could as long as he could,” Sybil said. “But, we didn’t want to put people in danger. We had to cut it off in the afternoon.”

The Smithermans also added that The Tin Cup and its surrounding area will need more damage control as they wait for the water level to return to normal. Picking up trash and making up for over a day’s worth lost of business will both be obstacles they will need to overcome.

Steve says that he has flood insurance, and that the flooding in the parking lot could last as late as Wednesday.

However, the flooding is out of his hands.

“There’s not much more I can do. I just have to wait on the water to recede. It is not up to me, it is up to the water,” Steve said.