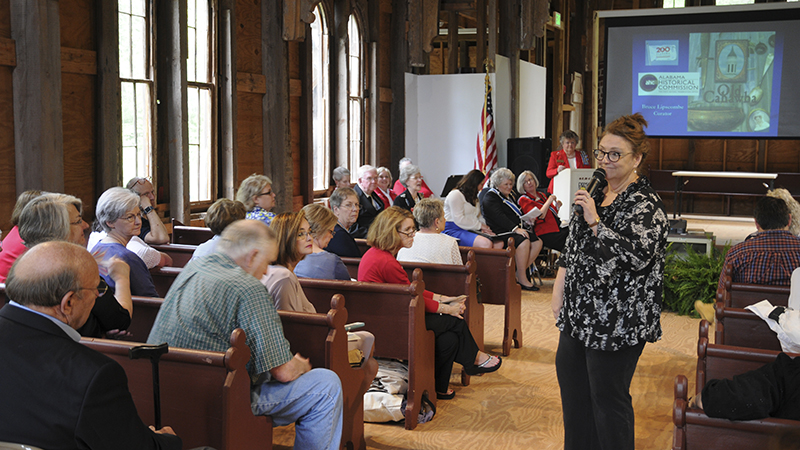 Old Cahawba Archaeological Park in Orrville served as host to dozens of guests Saturday as they celebrated the upcoming 200th year of Alabama’s life with food, presentations and wagon ride tours.

Alabama, founded on Dec. 14, 1819, is closing in on year 200 as a certified state in the union, and many people felt a need to throw a celebration.

Cahawba, which served as the state’s first capital, was a destination people felt was appropriate.

After Old Cahawba stepped up to host, organizations such as the Daughters of the American Revolution’s Cahawba Chapter and William Rufus King Chapter and ambassadors like Bobby Joe Seales from the Alabama Bicentennial state organization facilitated the operations and attended the event alongside interested members of the public.

According to Cynthia Hammerlee of the DAR, it took over a year to plan out the day-long festivities.

However, she believes the work was well worth it.

“It has been great meeting all the other DARs that drove from Huntsville, the Montgomery-Auburn area, places like that. I have been fascinated with the history of Cahawba,” Hammerlee said. “It was the obvious selection to hold the celebration.”

The celebration featured a presentation of topics such as of the history of the DAR, the state’s history with Cahawba and what the goals of the archaeological park are. Guests were treated to a wide variety of food and drink options.

Much of the gathering took place inside the church located next to Cahawba welcome center.

After the early-day festivities and the afternoon presentations were over, Old Cahawba treated guests to wagon ride tours of their park to learn more about the history that shaped the first capital of Alabama.

While some were thankful for a day to gather to celebrate 200 years of Alabama, others were happy the weekend’s stormy weather held off long enough for them to enjoy their plans that took multiple months of collective effort.

“It worked out perfectly. We had such a big crowd in attendance, and it was wonderful to have a full house in the church,” said DAR member Carolyn Dunaway.

“We worked hard to put on this celebration. We are really lucky that the rain went by the wayside.”

As the official 200th birthday of Alabama inches closer and closer, Old Cahawba will continue tours of the historical park. They offer tours every month other than January and June.

While the rain did eventually break through, it was too late to spoil the gathering.