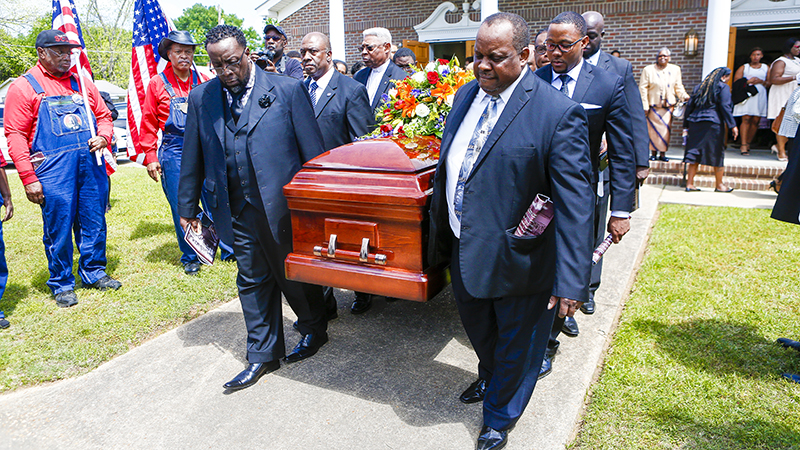 The passing of the Rev. Dr. Frederick Douglas Reese left many inside and outside of the Selma community impacted by the loss of the last member of the “Courageous Eight.”

His work in Selma and abroad for the advancement of civil rights affected the lives of countless souls, and they showed up in big numbers to celebrate his life Friday morning during his funeral at Ebenezer Missionary Baptist Church.

In fact, the community response was so great that Ebenezer could not accommodate everyone wishing to pay their respects.

In order to ensure everyone would receive a chance to celebrate Reese’s life, a small group of churches and volunteers joined forces to make the funeral service available via livestream from Selma High School.

The groups worked to get a shuttle service up and ready for the funeral, which included Neely Charter Service donating a bus and other churches offering vans.

The shuttle service started at 9:30 a.m. in the Selma Mall parking lot.

To help with the growing crowd, the church vans later started shuttling people to and from Ebenezer’s Fellowship Hall, where the funeral was streamed as well.

The churches and volunteers worked to make the technology run as smooth as possible for the event, while Selma High’s SGA volunteered to usher the satellite location funeral.

Understanding the legacy that Reese left behind, volunteer Lydia Chatmon knew people would want a secondary place to go when Ebenezer overflowed.

“We wanted to make it possible for everyone to get a chance to pay their respects,” Chatmon said.

“We knew that the crowd was going to be there, and this was an excellent solution that has had excellent execution. I have seen the church vans constantly coming back and forth dropping off people.”

The funeral service at Selma High had more than 70 people inside to pay their Respects.

They comfortably sat down and listened to the messages of pastor James Perkins Jr. and other dignitaries.

According to Charles Johnson, coordinator of the shuttle services, he and others in charge wanted to make sure everyone taking the time to honor Reese was properly accommodated.

However, some raised the question over the course of the week of why the funeral service could not be held somewhere larger to accommodate more people.

The family felt it was necessary to have the funeral at Ebenezer. According to Johnson, so that was what was going to happen.

“We had many discussions and suggestions about possibly finding a larger venue. But the family felt it was important to have the service here at Ebenezer,” Johnson said.

“Our job then was to make sure, as we do with any family in a grief-stricken situation, to do all we can to make it easier for them.”

According to Johnson, the Ebenezer church family has been working nonstop to try to comfort Reese’s family and provide them their ideal celebration of his life.

The funeral itself was a passionate exhibit of everything positive there was to say about Reese.

The audience in Selma High’s auditorium and Ebenezer’s Fellowship Hall was a mixture of energy, tears and praise.

When asked to sum up the life of Reese, Johnson responded with a bible verse:

Although no longer with us, Reese’s multiple decades spent touching the lives of others will not soon be forgotten. At the funeral and the streaming locations, programs honoring Reese were handed out to the attendees.

In the back of the program, Reese’s wife, Alline, left behind a message for those remembering the legacy of the Rev. Dr. F.D. Reese.

“I thank God for allowing Frederick to be in my life for sixty-four years. He was a wonderful husband and father. Frederick will be tremendously missed by his wife and children,” she wrote.