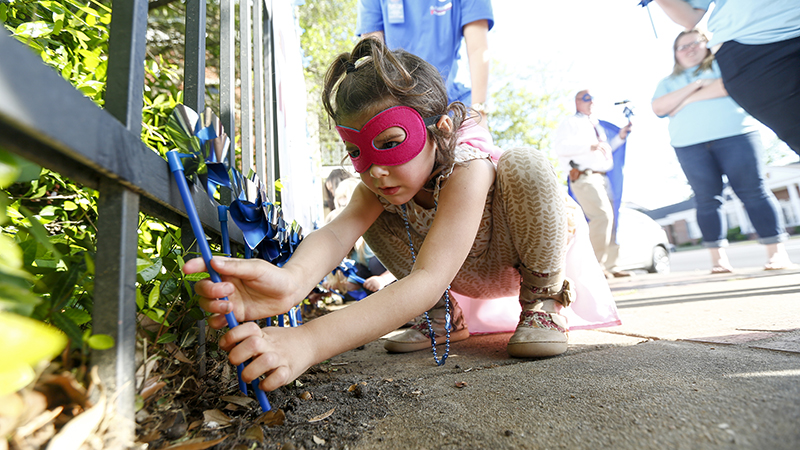 “We do one pinwheel to represent each child that was involved in a child abuse investigation last year,” said Central Alabama Regional Child Advocacy Center executive director Lauri Cothran.

The Center works with DHR, the Selma Police Department, the Dallas County Sheriff’s Department and District Attorney Michael Jackson on abuse cases, and through the center, the child only has to tell their story one time.

Each interview is done by a professional and is recorded for other departments to use to aid in the case.

“We can go there, and the child can tell the story one time. That way, instead of having that child relive that incident over, and over, and over again, we do it one time and have all the players at the table at one time,” said Captain Mike Granthum with the Dallas County Sheriff’s Department.

“It’s better on the child because they don’t have to keep reliving that story over and over.”

Cothran said she hopes having the pinwheels out front will help people recognize the amount of children in the area that go through abuse.

“We want people to see the pinwheels and think of Child Abuse Prevention Month,” Cothran said.

“If we can get to that point where people can see a pinwheel and think about child abuse prevention month, then maybe even think of us, [they may be able to help].”

At the pinwheel planting, the center also had a photo booth set up where people could have their picture taken dressed as superheroes.

“It’s just something different and it gets them to realize how much they can be a hero to a child,” Cothran said.

“What they do helps children. We want them to realize that what they do is important.”

Granthum said he appreciated what the center does for the children, but that it’s also sad to see that number of pinwheels planted in the garden.

“This helps bring awareness to the cause. There’s nearly 300 and that’s just what we know. There’s no telling how many go unreported,” Granthum said.

“It’s disheartening to see that many pinwheels, I’d love to see that number go way down.”