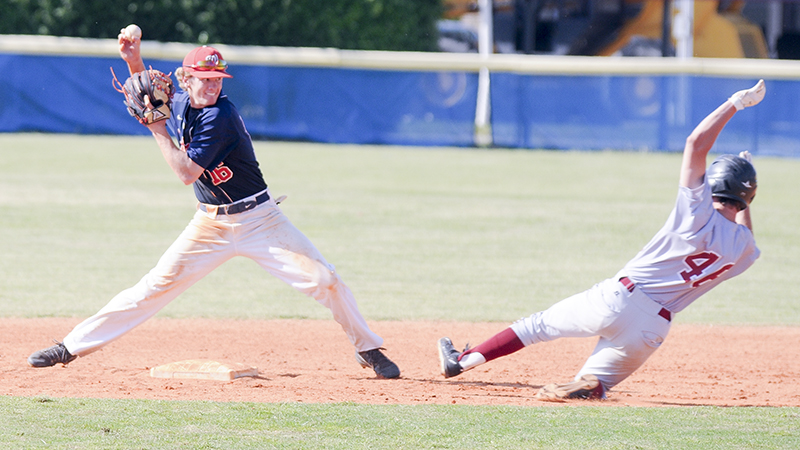 The Patriots won game one 3-2 on a walk-off single by shortstop Matt Jacobs, and won game two 8-1 behind John David Kytle’s strong outing on the mound.

The magic number for the Patriots to make the playoffs is now down to six games. WCCS needs to be one of the top-five teams in the ACCC South division for a chance to play in the post season.

“It’s huge for us,” WCCS head coach Frank Elliot said. “We’re trying to countdown every win we can. Every win we can get, we’re closer to the playoffs and that’s our goal.”

Micah Henderson pitched all seven innings for the Patriots in game one, and kept the team within striking distance. He allowed five hits, two runs and only walked two batters during his outing.

“Micah Henderson really stepped up,” Elliot said. “Right when we needed the pitches, he was able to get it done for us.”

The Patriots lineup struggled at the plate for most of game one, and only had three hits before the seventh inning.

“We just kind of hung in there until that last inning, and then it started to off with a spark,” Elliot said.

Patriots clean-up hitter Glen Whitaker beat out a drag bunt to start off the bottom of the seventh. Ryen Harbin then worked a walk to put the tying run on first base with only one out.

Elliot brought in Corevantar Graves to pinch-run for Harbin, and put more speed on the bases.

“I put in a really fast guy, because if it gets over their heads I’m going to try and score from first,” Elliot said. “Noah Eller was able to get it over the center fielder’s head, which was a really good shot, and we just ran [Graves] right on to the plate.”

The two-RBI hit by Eller tied the game 2-2, and gave Jacobs the opportunity to win the game with his walk-off single.

“It was a tight, close game until the last inning and we were able to overcome them,” Elliot said.

The Patriots were able to play with a lead in game two, as Kytle held Coastal Alabama to just one run and three hits in his complete game effort.

“Some of their better hitters are lefties,” Elliot said. “We noticed that, and we were going with the lefty-lefty matchup with J.D., and he was able to shut down a lot of their lefties right when we needed it.”

Kytle struck out seven hitters, and only walked three batters.

The Patriots had a 2-1 lead going into the fourth inning, before the offense had a six-run surge that broke open the game.

A few walks mixed in with a couple singles, and topped off by a two-RBI triple by JaBronski Williams gave Kytle all the run-support he needed to finish the game.

“Anytime you get a big inning and get that many runs, you should have enough bullpen to win the thing,” Elliot said. “We didn’t even use the pen today.”

WCCS next series is a re-match against Coastal Alabama South at their field in Bay Minette.

“It’s going to be two tough games down there,” Elliot said. “Again, we’re going down with this countdown. We’re just going to try to countdown six wins. We don’t care how we get them. Even if we don’t win tomorrow, we still got more games to get the six wins that we’re thinking will help us get there.”