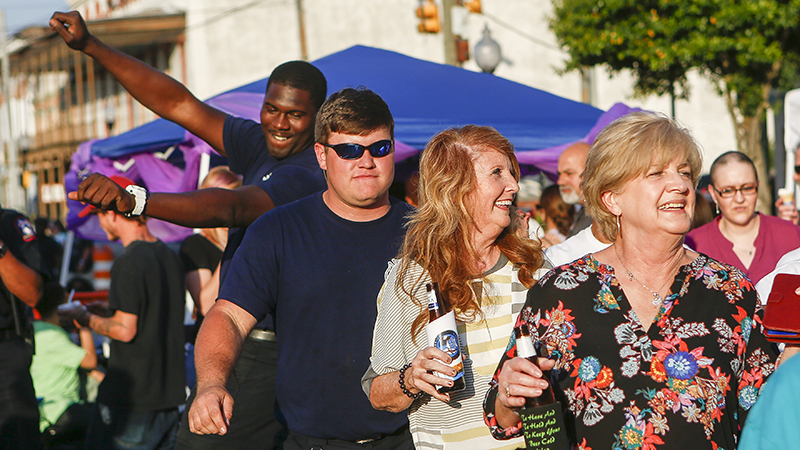 More than 20 teams competed to see who could cook the best chili, and hundreds of community members flocked downtown to taste them all.

“Everybody can cook chili. You know, ribs, there’s a little trick to, and there’s some other things that are harder to cook, but chili is a fun thing to cook that doesn’t require a whole lot of time, and you’ve got teams that are willing to come out and do it,” said Davis Henry with team Big River Car Wash. “It’s a fun thing. I don’t think any of us take it serious. I know several of us were ribbing each other all afternoon, but it’s all in fun.”

As people went tent to tent trying each team’s chili, others danced to tunes from DJ Terry Chestnut. 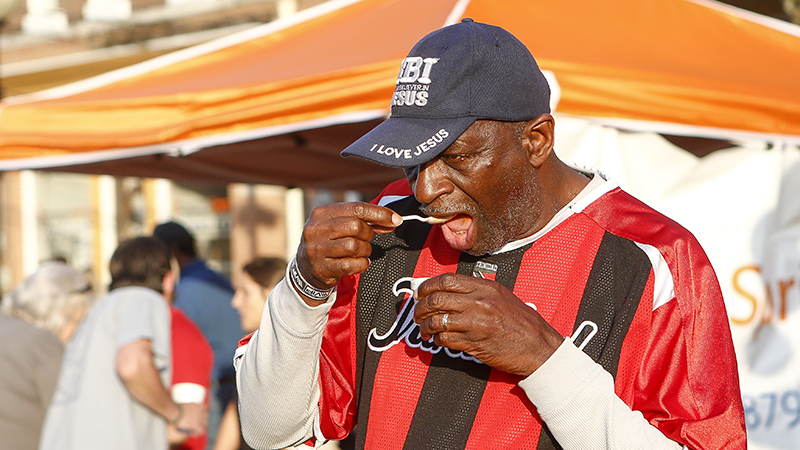 Winston Williams tries one of the many chilies that were cooked Thursday. (Alaina Denean Deshazo | Times-Journal)

“It’s just a good time for everybody down here. It’s just a lot of fun to see the people come out,” said Earl Pate with team Cigna HealthSpring.

“They get to do something that doesn’t cost them a whole lot of money. They walk in the streets, let their hair down and everybody seems to get along.”

The cook off brings people from all walks of life out for a fun night.

“You’ve got young and old, you’ve got kids, you’ve got everybody here, and it’s just a great event that brings the community together,” Henry said. “Win, lose, draw, it really doesn’t matter. It’s about being part of a great community event.”

But win he did. Davis’ team took home first place in the cook off, which isn’t his first time taking home the big trophy. The Alabama Department of Labor was first runner-up, Trustmark Bank was second runner-up and Bush Hog won “Fan Favorite” and “Most Spirited.”

Despite winning, Davis is just glad the event is sticking around. Leadership Class XVIII, which founded the cook off, is saying goodbye to the event, but it isn’t going anywhere. The torch has been passed on to the Blackbelt Benefit Group to carry on the tradition.

“We started the chili cook off seven years ago as our project, and it has carried on throughout every year. This year, we are officially passing the torch to Blackbelt Benefit Group,” said Leslie Free, a member of Class XVIII.

“Our class … has gotten smaller, and we partnered with Blackbelt Benefit Group this year. We think it was another success, so thank y’all for coming.”

Including this year’s event, the cook off will have raised more than $60,000 for charities in Selma and Dallas County. This year’s cook off benefitted the Bloom House.

“That, to me, is an awesome achievement right here,” Free said.