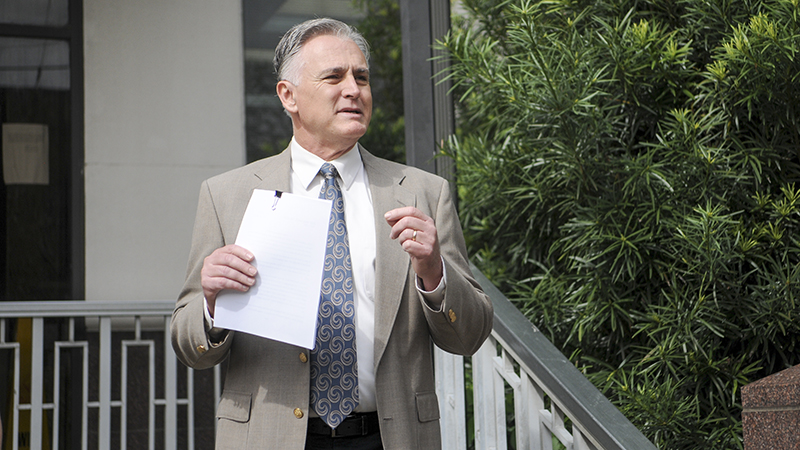 Mark Story, a member of the Dallas County Board of Education, announced his intentions Friday to run for Alabama Senate District 23.

Story made his announcement on the steps of the Dallas County Courthouse with his wife Regina at his side and supporters looking on.

“I am seeking to be your senator for District 23, and I will be running as an independent candidate,” Story said.

The District 23 seat is currently held by Sen. Hank Sanders, who has held the seat for 35 years.

“I think it’s time for new leadership, a new direction and [to] have new representation that looks out for the community as a whole, the district as a whole, [and] not any particular group,” Story said.

One day after the qualifying period ended in February, Sanders announced he would not seek reelection. He and his daughter, Malika Sanders-Fortier, were the only two candidates to qualify for the District 23 race. Sanders said all along he intended to run but decided to bow out after qualifying ended.

Story did not comment on how Sanders’ decision to not run again played out, but said his decision not to run did play a factor in his decision.

“This is an opportunity where he has chosen not to run, and it just opened the door for an opportunity to seek that position, and I’m willing to accept the challenge,” Story said. “The fact that there’s no incumbent in the race really does open up the potential for new leadership to come in.”

Story said this is something he has wanted to do for quite some time.

“This is something that I have always wanted to do, to help our community, to strengthen our community, and I feel like I’ve got the ability to do that, and I’m offering myself as that to serve our district,” he said.

According to Story, he has served on the Dallas County Board of Education for 18 years and currently serves as chairman. Story is also a veteran. He served in the United States Navy Reserves and retired as a chief petty officer.

Story’s platform is based on bringing more industry and jobs to District 23, as well as educational opportunities and public safety.

To get on the ballot, Story said he will need to get an estimated 1,500 signatures from qualified, registered voters. The deadline to get those signatures and submit the petition is June 5, the day of the primaries.

Story is confident he can get that many signatures plus more. The signatures will have to be reviewed by the Alabama Secretary of State.