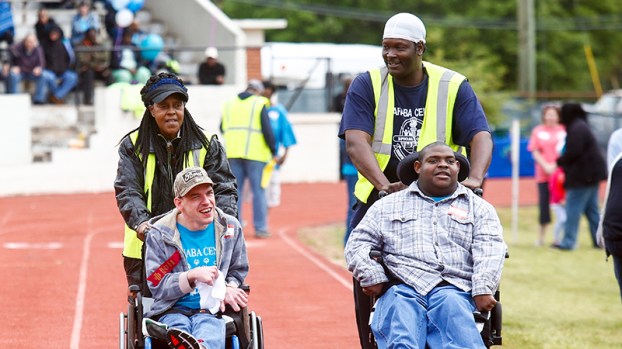 The sky was gray over Memorial Stadium Wednesday but the faces were bright at the 39th annual Cahaba Center Special Olympics.

“Even though it’s cloudy today, they brighten the day,” said Tammy Till, developmental disabilities services director for Cahaba, of the athletes.

“They’ve been practicing and working hard and they cherish their ribbons and they like to share them with the community.”

Athletes from the Cahaba and Montgomery Therapeutic Recreation Center competed in the games, which included a softball throw, shot-put, dashes and kickball.

The day opened with a parade of athletes with Selma Mayor Darrio Melton and Stephanie Clark carrying the torch.

“The athletes practice for month and months to prepare for it. They really look forward to it,” said Carrie Bearden, executive director of Cahaba Mental Health.

“We have some people who walk, some who run, some people who participate in the wheelchair race so they have somebody walk with them to race, so all different levels of ability and all different strengths. Everybody is given an opportunity to compete if they want to, and everybody gets to feel like they win, which is great.”

John Ward and Henry Ward are brothers who compete against each other at the Olympics, and both are just as determined as the other to beat their brother.

When asked which one was better at the games, they both said at the same time, “me.” “I just love what I’m doing,” Henry said. “I love everything about it.”

Students from various local high schools attended the event to cheer the athletes on, and Southside’s JROTC color guard presented the colors and the marching band provided music.

“It just blesses our hearts. Everyone puts such effort training and practicing. They look forward to this day,” Till said.

“It makes all the planning worthwhile [to see the athletes smile] because they look forward to this day like they do Christmas.”

Till said the athletes love wearing the ribbons, some even for days, and showing them off to people in the community.

“It really makes them proud of themselves and they look at it as a way to give back to the community,” Till said.

“We’re all differently abled and some of them have different disabilities, but everyone has their own talents and gifts and this is a way to showcase what they can do.”

A group of people joined hands and prayed together Wednesday afternoon in front of Selma City Hall to bring attention... read more