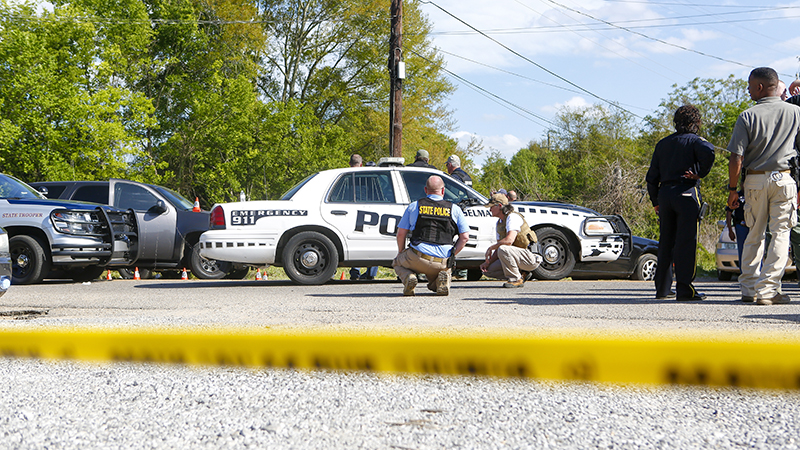 Agents with the State Bureau of Investigation investigate the scene of an officer involved shooting in Selma Monday afternoon. (Alaina Denean Deshazo | Times-Journal)

An investigation into an officer-involved shooting involving a Selma police officer is underway after a high-speed chase ended with gunfire Monday afternoon.

According to Sgt. Steve Jarrett with the Alabama State Troopers, the State Bureau of Investigation is investigating the incident.

“Shots were fired by Selma police. The subject was wounded and taken to the hospital,” Jarrett said Monday afternoon while on the scene.

“Today, at approximately 3:10 p.m., one of our troopers observed a vehicle traveling at 104 miles per hour on U.S. [Highway] 80,” Jarrett said. “He stopped that vehicle and exited the patrol car. The driver fled.”

The driver led officers on a high-speed chase reaching speeds of more than 100 miles per hour, according to police radio traffic, through Lowndes County and into Dallas County.

The chase ended near the intersection of Old Montgomery Highway and U.S. Highway 80 a few hundred feet away from the Edmund Pettus Bridge, where officers from multiple agencies were awaiting the suspect as he crossed over the railroad tracks and rounded the curve.

“Their priority was to try to keep him from getting into this crowded part of town and endangering the citizens of Selma,” Jarrett said.

“He encountered Selma PD, and that’s when everything took place.”

According to Jarrett, the suspect’s vehicle struck a Selma police officer’s patrol car, and that’s when shots were fired.

The number of shots fired by the officer has not been released, but the suspect’s vehicle appeared to have multiple bullet holes in the windows.

The severity of the suspect’s injuries is also unknown at this time. Capt. Johnny King with the Selma Police Department said the suspect is from Dallas County.

According to Jarrett, the Selma Police Department requested the SBI to handle the investigation, which is protocol when an officer fires their weapon.

SBI agents, as well as agents with the Attorney General’s Office were on scene. Alabama State Troopers and deputies with the Dallas County Sheriff’s Department also responded to the scene.

No additional details have been released.