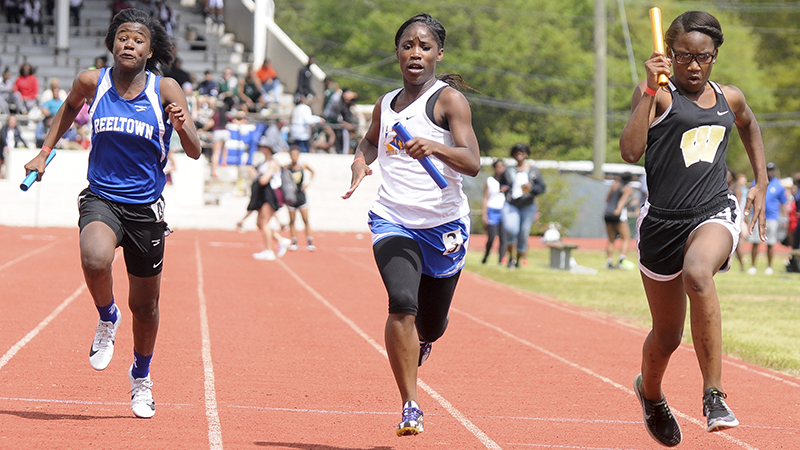 Selma High sophomore Lynderakia Harris finishes the final leg of the 4-by-100 meter relay and helps the Saints pick up 3 points at the River Region Meet at Memorial Stadium Friday afternoon.

More than 15 schools met at Memorial Stadium on Friday for the River Regional Meet hosted by Selma High and Elmore County.

Local schools such as Southside, Dallas County and Ellwood Christian Academy were at the meet as well.

There was plenty of competition to go around as they went up against athletes from Demopolis, Park Crossing, Wetumpka and other visiting schools.

The River Region Meet was the second meet of the season for the Selma Saints, so head coach Katasha Turner is getting her athletes accustomed to the competition.

“We’re still in the learning phase and figuring out what we need to do,” she said. “We’re trying to put everyone in the best position possible.”

The Saints have several athletes trying out new events, and they are still adjusting to the learning curve. The Saints girls finished seventh overall in the 4-by-100 meter relay with a 57.12 time. Sophomore Lynderakia Harris was barely beat out on the final leg by .2 seconds. The relay team still picked up 3 points for Selma High.

“We’ve got some kids doing new events like the high-jump and long-jump that haven’t done it before,” Turner said. “The kids are still trying to learn, and they have to learn fast. It’s fast, and we have about four to five week left in the season before sectionals.”

Southside, on the other hand, was participating in its fourth meet of the season. The Panthers didn’t have their entire team with them, but the team still performed well according to head coach Samantha Henry.

“I think we did an outstanding job for the events that we ran today,” she said.

They didn’t place, but they were the top two finishers in their heat.

Southside’s 4-by-100 meter relay team earned three points for the team with a 48.64 second time.

Dallas County was just behind them with a 48.94 race, and Selma had the eleventh best time at 51.06.

The next meet at Memorial Stadium for the Saints isn’t until April 14. The goal, however, is to be ready for sectionals at the end of the month.