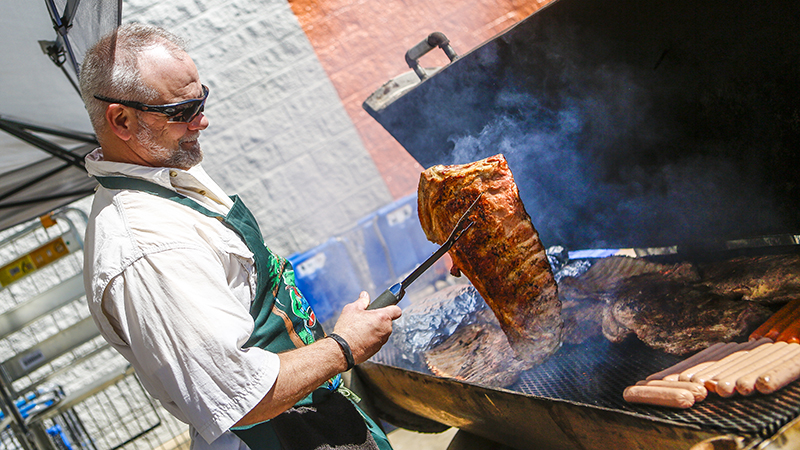 Several Selma Wal-Mart and Pepsi of Selma employees got together Saturday to do their part in raising money for the fight against cancer.

The two teamed up to sell ribs, Polish sausages, hotdogs, sandwiches and drinks to raise money for Relay for Life Selma and Dallas County.

Rose Walker, Selma Wal-Mart pharmacy department manager, Wal-Mart Relay for Life team captain and Relay committee member, said she enjoys being able to participate in Relay and do her part to give back to those in need.

“I am just thrilled about [raising money for Relay for Life]. I love it,” Walker said. “I think it’s good because we’re trying to fight it. We try to raise as much money as we can because it doesn’t matter who you are, cancer effects everybody. We’re just trying to do what we can to help toward the fight.”

Pepsi employees decided to offer a helping hand by cooking the meet for the fundraiser. Pepsi sales employee Brian Sharpe said helping out the cause is extra special to him.

“Me personally, my mother [Fannie Lee Sharpe] died of cancer, so doing something like this is a privilege and something that words really can’t explain,” Sharpe said. “Any way that you can help other people to survive and for other families not to go through it, would be a blessing.”

Walker said she enjoys volunteering with Relay, and is appreciative of everyone in Selma coming together each year to raise money.

Walker said they had a good turnout, and she is looking forward to this year’s events through Relay.

“It’s a really good cause and I really do appreciate everybody that volunteered and everybody that’s come and patronized us,” Walker said. “Our goal this year for Relay for Like is like $125,000. We’re trying to do the best that we can to reach what we set out to do.”

Walker said one of her favorite events for Relay for Life is the survivors banquet, which honors those that have battled the disease and gives them a night of fun and recognition.

“It just brings joy to my heart,” Walker said. “It makes me want to keep doing more because that lets me know and other people know that you can survive.”

Sharpe, who works with Wal-Mart through Pepsi, said he was glad to be able to help out and do his part.

“It’s fun. I know working Wal-Mart myself, I know most of the employees here, so it’s not only a friendship, it’s like a family,” he said. “Being here with Wal-Mart employees and my fellow Pepsi employees, it’s just been an honor.”

According to their website, Relay for Life Selma Dallas County will be held at Lions Fair Park June 1 at 6 p.m.

Officers pinned down by gunfire at GWC