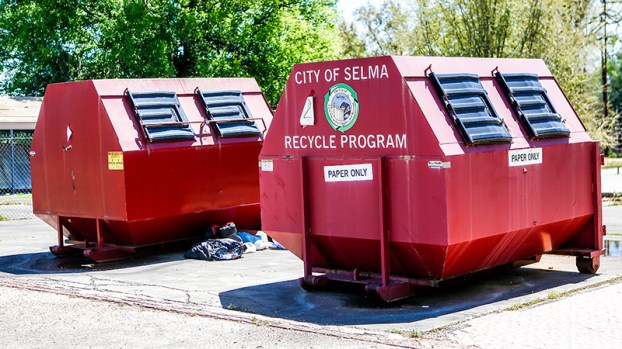 At a previous Selma City Council meeting, Ward 4 councilwoman Susan Youngblood advocated for a return of the city’s old recycling program, which provided the public service to all residents.

The program dissolved in recent years due to issues with funding, with recycling money reallocated towards special events in the city budget.

Youngblood proposed reallocating $10,000 designated for the special events section to be moved back to where it was originally with the recycling program. Additionally, she vowed she would apply for federal grants to be used exclusively for recycling projects and programs.

“I asked for it to be put back into recycling funds, and that we could match the funds with grant money as well,” said Youngblood. “We had $10,000 for recycling, but it’s not enough. There was a time where we were recycling paper, plastic and cardboard.”

Another issue was proper usage of the recycling bins, which would oftentimes contain garbage and trash, or worse.

Despite the halting in funding and improper recycling practices by some of the residents, Ward 1 councilman Carl Bowline says that the city has all the equipment it needs to get the recycling program up and running once more, all they need is the funding and suitable recycling education.

“All of it is sitting there, just lying dormant,” Bowline said. “I am for the program. One of the issues previously was crap being thrown into the bins. I feel there has been a misunderstanding on what is recyclable. Residents are confused on what to recycle and what to not.”

According to Youngblood and Bowline, the city’s trash and recycling problem has grown worse and worse. Bowline said that people in his ward now have to go to Tuscaloosa for the same services that used to be present in Selma.

Youngblood said that branches, shrubbery and large limbs are scattered throughout the city.

While this may not be considered recyclables to others, Youngblood sees an opportunity to turn it into a profit for the city.

“I would purchase a wood-chipper for the city. It causes problems to put limbs and leaves in the landfill because it takes up so much space,” Youngblood said.

Under Youngblood’s proposed plan, the limbs and leaves would be reduced to mulch.

The mulch would then be used for a multitude of purposes. This includes profit, where the trash can be turned into mulch or compost, bagged and sold, rather than just wasting away.

As Youngblood notes, the city is not going to get rich off of recycling limbs.

However, it will help recycle objects that would instead be going to the landfill, which is currently causing financial headaches with $160,000 to engineer and construct two more cells before it reaches full capacity.

While the ideas of the wood-chipper and a public recycling service would improve the state of the city, none of it will be sustainable without a reliant flow of funding to the programs, and it is also no guarantee that a grant for the recycling program can be secured.

While Youngblood, Bowline and other council members would support a return of a viable recycling program, it is not known how many people agree with Youngblood’s proposed plan to make it happen.

Nevertheless, Youngblood and Bowline said the equipment is there ready to be used.

If the city receives federal grant money for the program, the  funds cannot be appropriated at a later date, even after the cycle for the grant ends.

Several Selma Wal-Mart and Pepsi of Selma employees got together Saturday to do their part in raising money for the... read more