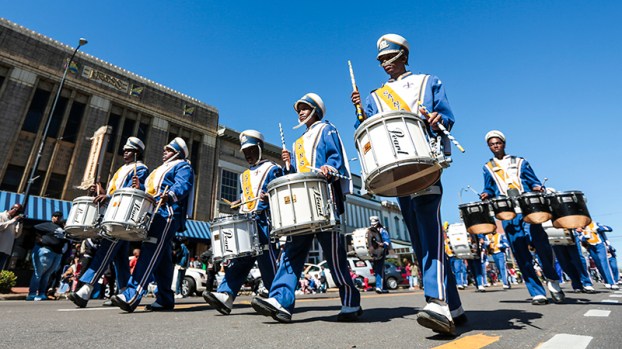 The Selma High School Saints marching band will play host to a Chicago high school for a gym battle of bands between the two institutions.

According to Selma High band director Brandon Williams, the gym battle is an event with energy bouncing from wall-to-wall with endless entertainment.

“The bands face off at half-court and play different songs. There is no gap time. One band will play a song, then the other band will play one, and back and forth it goes. We make sure everyone gets their money’s worth,” Williams said. “It bodes well for spirits as well as the band program.”

Williams added that the bands will play around six to eight different songs, with additional competitions between the percussion line, dance line and others.

The visiting school, Proviso West, is coming to Selma as part of their tour of Historically Black Colleges and Universities (HBCUs) in the South. The band will visit the local HBCUs and will go to Selma High at 5 p.m. on April 3 to compete against the band.

Proviso West has a larger band that promises to put on a good show, but Williams has confidence in his students. Their approximately 65-member band will be under the instruction of a steady hand of a 13-year veteran band director in Williams.

Although they are hosting this battle for the Chicago school, the Selma High band has plans for its own interstate traveling as well.

Williams says that one of the main goals of the upcoming Proviso gym battle is to raise money for a May band competition in Atlanta. Tickets for the upcoming battle are five dollars per person.

Selma is no stranger to tourism catalyzed by the history of the city’s involvement in the fight for civil rights. This far-reaching influence touched the minds and souls of Proviso West, who want to show their appreciation for the city and their willingness to partner with the schools.

“It says a lot about what they think about our program,” said Williams.

Being with Selma High School for 15 years, Williams cares deeply about all facets of the school, even outside of band.

After the gym battle, which is supposed to take around an hour and a half, Williams encourages audience members to take time to get to meet the new principal of Selma High, Ozella Ford, during her meet and greet.

Taking place in the Selma High gym, the event will not be affected by undesirable weather conditions. Furthermore, Williams vows to promote not only a fun atmosphere, but a safe environment as well.

Updated results from the band’s May competition will be provided in due time.

By Oniska Blevins | The Selma Times-Journal Smiles and ice cold Coca-Colas were shared at the ribbon cutting and dedication... read more