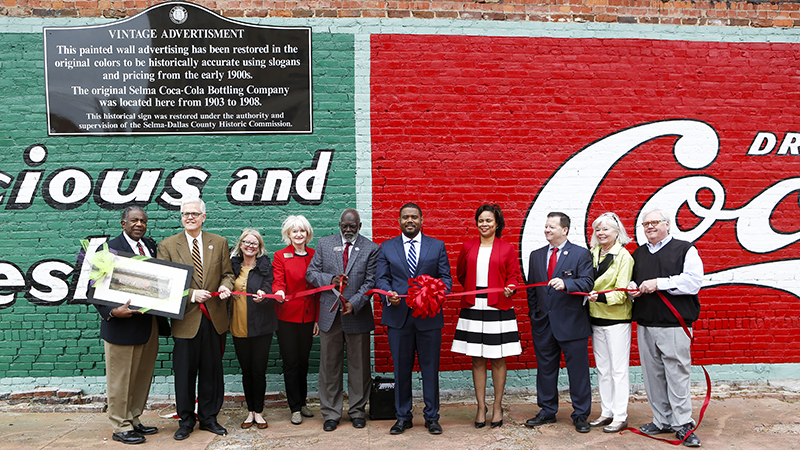 Smiles and ice cold Coca-Colas were shared at the ribbon cutting and dedication of the restored Coca-Cola mural downtown Monday morning.

As Coke representatives passed out cold refreshments, guests had the opportunity to view the newly restored mural and hear from the people that made it all possible. ArtsRevive gained sponsorship from Coke and had local artist Sheila Ferrell repaint the historic mural.

ArtsRevive executive director Becky Nichols said she is grateful for Coke’s support in making downtown look beautiful. She said efforts like this one are just the beginning, and they hope people see the beauty and want to continue to strive for a better community.

Selma Mayor Darrio Melton led the group in prayer and offered kind congratulatory words to the ArtsRevive staff and Coca-Cola.

“Thank you so much for your commitment to the city of Selma,” he said.

Coca-Cola United Director of Multicultural Consumers and Communities Walter Body offered the welcome on the behalf of Coca-Cola United and said it was a dream come true to be at the dedication.

He reflected on coming to Selma during the 50th anniversary Bridge Crossing Jubilee and leaving feeling like they needed to be involved with the city. He said during that visit, Coca-Cola United CEO John Sherman commented, “how great would it be for Coke United to make an imprint on Selma?” They then took that as a charge to create a lasting relationship with Selma and become involved in community efforts.

“This is just the beginning and we have a lot of plans for us being involved here in the city of Selma,” he said.

Sales Center Manager for Montgomery Coca-Cola Matt Flurry said he could sense the excitement and growth that is coming to Selma. Several people have seen tourist pose in front of the original mural and take photos, but now with the new restoration Flurry feels those numbers may increase.

“I think it would create even more excitement and be more of an attraction for people to come by and take a photo with it.