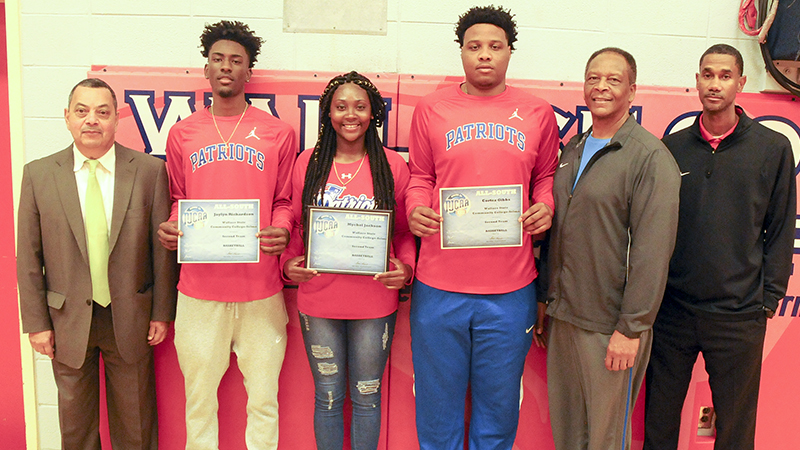 “Obviously, they are shining examples of the continued excellence we have among our student body,” Mitchell said. “We are very proud of these students, and we know that we have many more that are working hard and represent the college very well.”

Jackson averaged 12.4 points per game in her freshman season with the Lady Patriots. She shot 47 percent from the field, which was the fifth highest shooting percentage in the ACCC. She also finished fifth in the conference in total rebounds with 217.

“Being a freshman, I feel honored to be in this position,” Jackson said. “I really appreciate my coaches and my teammates for helping me out.”

Women’s basketball head coach Herman Turner was proud to see one of his young players get recognized.

“Mychel was a great contributor,” Turner said. “She did a lot of things well.”

Men’s head coach Duane Evans was glad to see two players, who came into his program as freshman, grow into highly productive players.

“It’s huge for us,” he said. “Guys come in and you work every day just to see them be successful in any facet of the game or life.”

Richardson started for WCCS as a freshman, and his experience helped him have a successful sophomore season.

“He understood exactly what to expect at this level,” Evans said.

The sophomore shooting guard, led the Patriots in scoring with 14 points per game.

Gibbs was a role player his freshman year, but really stepped up his game as a starter in his second year.

“Cortez was another player that got playing time last year as a freshman,” Evans said. “He was probably our most improved player of the season this year. He came in and made big contributions for the team.”

Gibbs was second on the team in scoring with 12.6 points per game, averaged 5.8 rebounds per game and blocked 21 shots this past season.

“I had a great season this year,” Gibbs said. “I was putting the ball in the rack and helping my team get as far as we can.”

The school is proud of its student athletes and the coaches that helped them reach this career milestone.

“I do want to commend Dr. Mitchell and Dr. Donitha Griffin for giving us the opportunity to carry on a sports program,” athletic director Marcus Hannah said. “I want to give all credit to our coaches. The coaches are the ones that get out there and work with them. Not just in the gym, but also in life.”