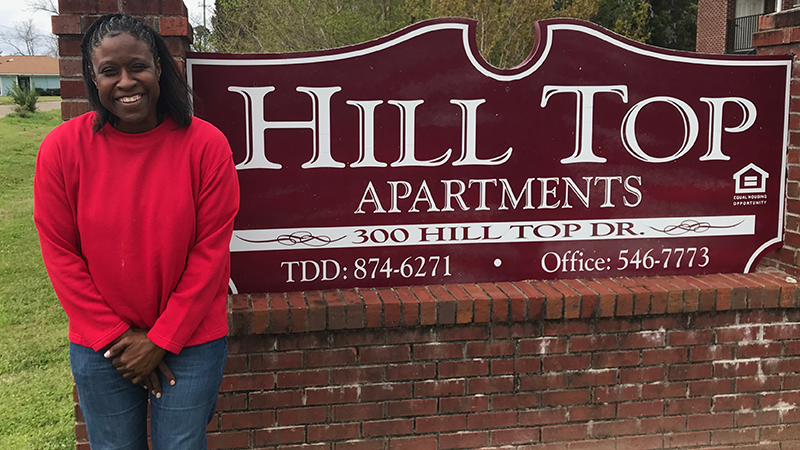 Stephanie Clark, who has developmental disabilities, is an active member of the Selma community.

This includes  Selma and Dallas County, where special relationships and unique success stories have emerged from people dealing with developmental disabilities on a day-to-day basis and those who take time out of their day to assist them.

According to the Alabama Department of Mental Health, one saying they have adopted for the awareness months is “See me as me,” meaning that the world should see those who are differently-abled for their true self, rather than the societal stereotypes often placed over their heads.

Stephanie Clark and Lynn Sanders are two people in Selma who share this bond, where both individuals choose to see the other for their positives, rather than their negatives. Clark, who has developmental disabilities, has spent around the past decade under the assistance and guidance of Sanders.

A long-time employee of the Cahaba Center for Mental Health, now serving as the residential coordinator for the program, Sanders has dedicated much of her time to building a friendship with her clients. She serves as Clark’s nurse.

Spending ample time with Sanders and other staff members, Clark is thankful for all the people who contribute to her well-being. She and Sanders both remark that the progress made over the decade has been noteworthy, going from heavy assistance to comfortable living in her Hilltop Apartments home.

However, Clark’s greatest talent may not be making a good meal, but rather competing athletically. According to Clark and Sanders, Clark will be going up to Washington state this summer to compete in the national level of the Special Olympics. She will run track at the national level, may possibly perform in the field and will compete locally in swimming events.

This is what “See me as me” means. People who are differently-abled, such as Clark, want to be seen for their accomplishments on the race track or in the classroom, rather than the perceived negatives.

For somebody who needed significant help at the beginning of their time together, Sanders is happy that not only has she improved her own situation, but the world around her has become more accepting of her condition.

“The last ten years, we have worked toward better inclusion in this state,” Sanders said. “People with developmental disabilities have the same goals and desires as we do. They just need more support.”

According to Sanders, there are around 25 other people with developmental disabilities she sees in the residential branch of the Cahaba Center, and she says they all have different needs, passions and talents.

For Stephanie, her talents are more than just sports-related. As aforementioned by her and Sanders, she has a talent for cooking, especially pizza, and even works at Cahaba by assisting in the cleanliness of the facility.

Clark attends New Bride Missionary Baptist Church in Sardis, swims at the YMCA and has many friends in the community.

She judges her friends by the contents of their character, and has friends who deal with mental health concerns and friends who do not.

More information about Clark and her journey to the Special Olympics will be provided as it gets closer to the competition.