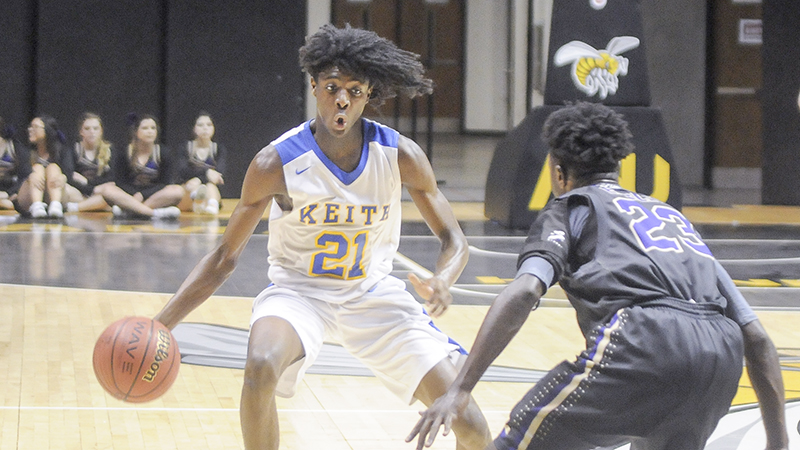 Keith's Arayvion Jones was selected to the second team Class 2A All-State team by the ASWA.

Keith High School and Morgan Academy both had incredible runs for their basketball programs, and the Alabama Sports Writers Association (ASWA) took notice.

Keith’s Arayvion Jones and Shatavia Moore were both selected to the Class 2A second-team All State team, and Morgan’s head coach Mark Knight was chosen as the AISA boys Coach of the Year.

Jones, who just completed his sophomore season, is a 6-foot-2 guard for the Keith Bears. He averaged 16 points and six rebounds per game. His scoring ability helped the Bears reach the Elite Eight game against Aliceville at the Dunn-Oliver Acadome on Alabama State University’s campus in Montgomery. He finished the Elite Eight game with a team high 14 points.

Moore, a senior for the Lady Bears, finished her career carrying her team to the Final Four at the BJCC in Birmingham. She led her team in scoring this season with 16.4 points per game, and she also averaged 4.9 rebounds per game. Moore was an all-around player for the Lady Bears. She was the primary scorer, ball-handler and rebounder. In the Final Four game, Moore nearly earned a double-double despite being double teamed throughout the game. She scored 13 points and collected nine rebounds against Sand Rock. Moore was a four-year player for the Lady Bears and will leave Keith with a Class 1A championship and a Class 2A Final Four appearance. She earned MVP honors in both the area tournament and the regional tournament this season as well.

Knight, who serves as Morgan Academy’s headmaster, stepped in to coach the Senators after not having coached varsity basketball in several years. In his first year back on the sidelines, he led the Senators through one of their best seasons with a 14-7 record. The team started on a six-game winning streak, was ranked as high as no. 5 in the ASWA rankings and made it to the Final Four round of the AISA state tournament. Knight managed to get the most out of his players despite the adversity they faced. The Senators  rarely had a size advantage and injuries sidelined major contributors for the majority of the season. Yet somehow, Knight and his team were able to battle through it and keep winning games.

Congrats to Jones, Moore and Knight on fantastic seasons and earning the recognition of the ASWA.