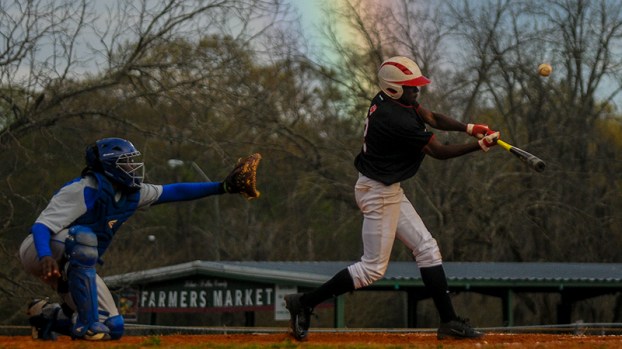 Southside’s Jaylen Colvin makes contact during the Panthers 6-3 win over Keith at Bloch Park on Friday night. Southside scored three runs in the last two innings to earn the win.

The Keith High Bears (1-3) and the Southside High Panthers (2-0) were in a tight ball game for three innings on Friday afternoon at Bloch Park before Keshawn Arrington entered the game in the top of the fourth and held the Bears scoreless for the remainder of the game.

Southside defeated Keith 6-3 in a closely contested game. Both teams tried to use their speed to gain advantage on the base paths, and the constant movement worked in Southside’s favor more often than it did for Keith.

The Bears scored the first run of the game on a throwing error by Soutshside’s catcher, which allowed Tyrone Lumpkin to get up and score from third base. The damage in the inning was minimized after Southside’s starting pitcher Keterious Jones picked off Anthony Lumpkin trying to steal third.

The Panthers answered back in the bottom of the first with an RBI double to centerfield by Kenyon Walker that tied the score at 1-1 to end the first inning.

Keith took the lead in the second inning when Justin McGuire scored on a passed ball to give the Bears a 2-1 lead. In the top of the third, Kaymon McGuire made the score 3-1 with a sacrifice fly to centerfield which brought in Kendarius Perry.

Again, the Panthers got themselves back into the ball game in the bottom of the third. Mar’Quavean Murray led off the inning with a single, and stole his way around the bases to cut the lead to 3-2. Eric Reeves then tied the game with an RBI single which brought in Jones.

“Once we got the score tied, I felt like we needed to bring [Arrington] in to keep it close,” Southside head coach Clarence Smiley said.

He picked up the win, and finished the game with five strikeouts in four innings of work.

Murray crossed the plate three times in the ballgame, including the go-ahead run in the bottom of the fifth on a tough ground ball hit up the middle that the Bears were unable to make a play on. Reeves earned his second RBI of the ball game on a fielder’s choice that allowed Jones to score as well.

The Bears best opportunity to get back into the ball game came in the top of the sixth inning. They managed to get runners on second and third with two outs and the tying run at the plate. Arrington used more pitches than he had in his first two innings, but he eventually got the strikeout that left the runners in scoring position stranded.

“We played well and hit the ball,” Keith head coach Anthony Lumpkin said. “They just made more plays than we did. Keshawn Arrington did what he does best, and that’s throw strikes and his guys made plays.”

Jaylen Colvin’s single in the bottom of the sixth scored Arrington as an insurance run, but he didn’t need it.

The Panthers were able to get the final three outs with the help of two strikeouts to end the game.

Lady Saints unable to catch up to Stanhope Elmore

It was a cold night at the Selma Softball Complex on Thursday night, and the Selma High Lady Saints lost... read more