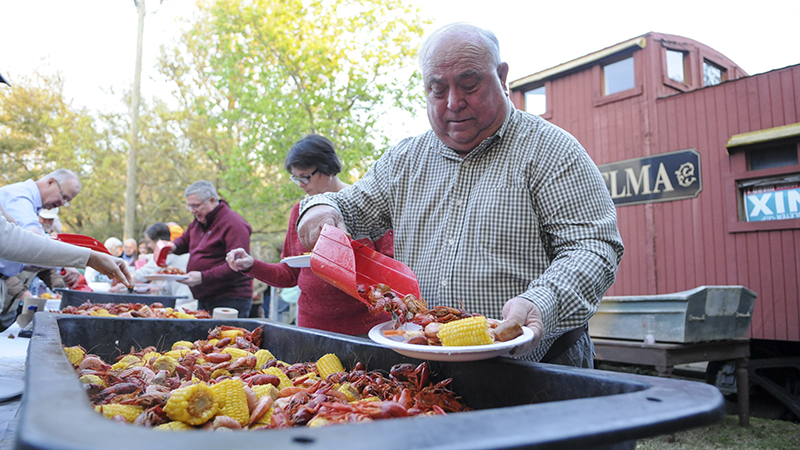 The Old Depot Museum brought the taste of New Orleans to Selma Thursday night at the Low Country Boil.

Beth Spivey, curator for the Old Depot Museum and event organizer, described the atmosphere as exciting and overwhelming. She said the television crews that are here for the 50th Anniversary of the assassination of Dr. Martin Luther King Jr. were at the event last night.

Spivey said she told the TV crew she was glad they were at the event because she feels like they would get a chance to really see what Selma is like.

“We all want it to survive, we all love each other, we like having fun and we like to preserve our history,” she said. “Everybody here is to support our history, good or bad we have to tell the story.”

She said the event exceeded her expectations and had the possibility for there to be an even larger turnout.

She said there have been a lot changes made to the museum, and she was excited for people to see them. According to Spivey, events like this helps people see the positivity in the community and the downtown area.

“I want them to see how great it is downtown, that its gonna be safe, you’re gonna have fun, you’re gonna see people you usually don’t see,” she said. “I really want to start bringing more people downtown and not have this negative cloud over downtown Selma.”

The Backdoor Band of Louisiana provided the music.

Community member Tina Henderson said the event was a great way to celebrate her upcoming birthday and she will be back in the future.

“It’s the atmosphere and the history within the building because it encompasses all of Selma’s history,” she said. “It’s not just based on one thing, it covers everything.”

Mary Elizabeth Switzer, who also attended the event, said she learned about the event from Facebook posts.

“It’s a good way for our community to get together, eat a lot of good food, tell stories and share our history,” she said.

Switzer said events like this show the potential Selma has and helps highlight the positivity in the community.

“It’s great for the community because it brings us out of our own little world and makes us see what’s in Selma, see what’s available in Selma, celebrate our history, celebrate the things that are good and also makes us aware of things we need to work on,” she said.

The Low Country Boil is the Old Depot Museum’s biggest fundraiser each year. The proceeds have helped Spivey make several changes to the museum and will help fund future projects.