Alabama State reaches out to Concordia 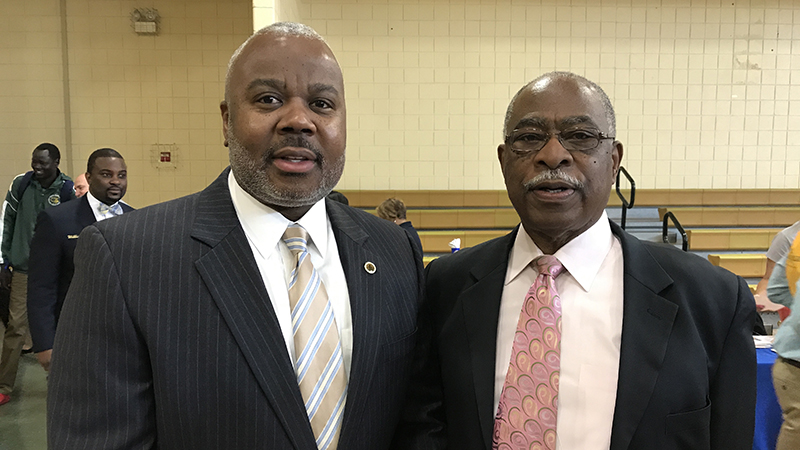 From top to bottom, staff and faculty from Alabama State University in Montgomery showed up in numbers Thursday to show their love and support to the soon-to-be closed HBCU Concordia College Alabama during their career day.

The career day, featuring 43 different schools from across the country, had a unique atmosphere looming over the event with a mixture of excitement and concern filling the Julius and Mary Jenkins Center located on CCA’s main campus.

While the day provided students an opportunity to connect to new schools and job possibilities, schools such as ASU wanted to show the Concordia students that they are not going through this transition process alone. After learning earlier this year about the school’s imminent closure, students pursuing degrees are now forced to look elsewhere to finish their education with no guarantee that all their credits will be transferred to their new university.

To show how serious ASU is treating the situation, president Quentin Ross and admissions director Fred Williams showed up for the career day along with multiple departments, including human resources, business, graduate schools, interdisciplinary studies, physical therapy and others.

According to Williams, supporting a sister HBCU going through hard times comes easy.

“It was not hard to rally support around this,” Williams said. “People wanted to come today and show that they care.”

To prove their concern for the students’ well-being, ASU members talked to interested students about the continuance of their degrees at their university, and ways that they could overcome whatever obstacles have been caused due to Concordia’s inability to stay open.

While Concordia will be operational for the rest of the spring semester with classes in session as normal so students can complete their credit hours, this accommodation is not enough for many who are looking for a new place to finish their degree.

Ross realized the stress of the current predicament, and felt his presence at career day could help ease some minds over what happens next.

“We have genuine concern about their success. I don’t know what it’s like to be pursuing a degree, and then the school closes. We wanted to make the transition as smooth as possible and give hope,” Ross said. “He (Williams) and I felt it was important to be here ourselves. Our students are our most precious resource.”

Although Concordia will not be able to continue operations following the semester, this does not mean Concordia’s staff has given up on teaching and helping their students. Interim president of Concordia, Dr. James Lyons, took time to speak to ASU and other universities personally to show his appreciation of their support during trying times.

While the career day was to help students with their job prospects, the news of CCA’s financial burdens traveled as the school released more and more information regarding the situation. The career day slowly turned into something more than just networking with high-end officials, morphing into a support center for the college kids.

For Lyons, seeing fellow presidents from sister universities meant the world to him. When asked about ASU’s large presence at the event, showing up with a bus load of people along with Ross, Lyons remarked that it gives him a little more solace over his beloved students.

The program lasted around three hours with representatives setting up their tables as early as 9 a.m. and lasting until around 1 p.m., with ASU members loading up on the bus and heading back to Montgomery.

Although it may be too late to reconcile any hope for Concordia, the school itself continues to show its commitment to its students until the final hour. With the completion of the career day, Lyons hopes the students left feeling more secure about moving forward.

The school, which first opened its doors in 1922, will have final exams the week of April 22.