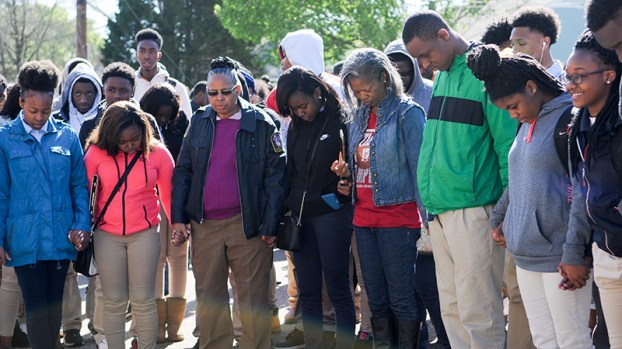 The national walkout movement called for students to peacefully protest gun violence by walking out of their classrooms for 17 minutes in honor of the Marjory Stoneman Douglas victims.

Ozella Ford, the interim principal at Selma High, was willing to give the students an opportunity to participate if they wanted to. Not all of the Selma High students joined in the walkout, but those who did were allowed to do so without being punished.

“They willingly cooperated with the walkout. We had speakers speaking among the crowd about the seriousness of gun violence in our schools. We want to join with the state to commemorate the lives that have been lost, and join with Birmingham City to let them know that schools here in Alabama and all schools recognize the seriousness of what happened to them,” Ford said.

“It was important to us because students got killed,” Selma High student Kietha Howard said. “We stood up for them.”

Some students didn’t know why they were walking out, but those who did were conscious of the importance of what they were doing. The group of students then formed a circle around detective Dorothy Cowan who spoke to them about the dangers of gun violence and the importance of keeping the school safe. After a moment of silence for the MSD victims, the students re-entered the school and resumed their school day.

Even a few parents showed up at the school to support the kids walking out of class. Selma High parent and Councilwoman Angela Benjamin was at the school taking pictures and recording the students outside the building.

“I think that it is wonderful that Selma High School is participating in this national event. It is a stand and they’re turning their back on guns,” Benjamin said. “It’s a stand against the legislators who won’t pull out the paper work and say let’s reform.”

T’Keyah Reeves, a senior at Selma High, didn’t participate in the walkout because she believed that the reaction could have been better.

At Dallas County, the entire student body gathered in the designated area at the football field. According to Dallas County principal Willie Moore, the students respectfully and peacefully walked out to show their support for the students who were killed in the recent school shootings.

“We had one of our teachers get up and speak to our student body in reference to what we were doing. We were honoring the people who lost their lives,” Moore said. “Our administrative team couldn’t have been more proud of our student body who were very respectful. We had students in tears. It kind of hit home for a lot of our kids.”

Even though the schools had no problem with letting their students participate in the walkout, the message from the administration didn’t exactly match with the thoughts and concerns of the students.

School administrators for Selma City Schools, Dallas County Schools and Meadowview Christian School were clear in stating that they were not protesting, but allowing the students to pay respects to the victims of the school shootings in Florida and in Birmingham.

“We gave our principals permission to allow them, if they wanted, to participate to walk out with the purpose of honoring those people who had been injured or killed in school violence or campus shooting,” Dallas County Schools Superintendent Hattie Shelton said. “It had nothing to do with gun control. It was to support the idea that we keep losing students and teachers in our schools and that we’re not happy with that and we want our kids to stay safe.”

Meadowview Headmaster Michael Blair said his students walked out of school and gathered around the flag pole, which was at half mast, to pray for the victims of the school shootings.

But students who were in tune with the movement had a different approach.

Benjamin said that her son, Kamau Little, has had conversations with his peers about the issues facing schools.

“He has had several conversations with young people in his peer group, and they have talked about this and the need for reform concerning guns and who can get them,” Benjamin said. “It’s a good new thing, this stand against gun violence.”

By Oniska Blevins | The Selma Times-Journal The Woolworth’s building has been renovated and will now serve as lofts in... read more