Three-year-old shot in face while in mother’s arms 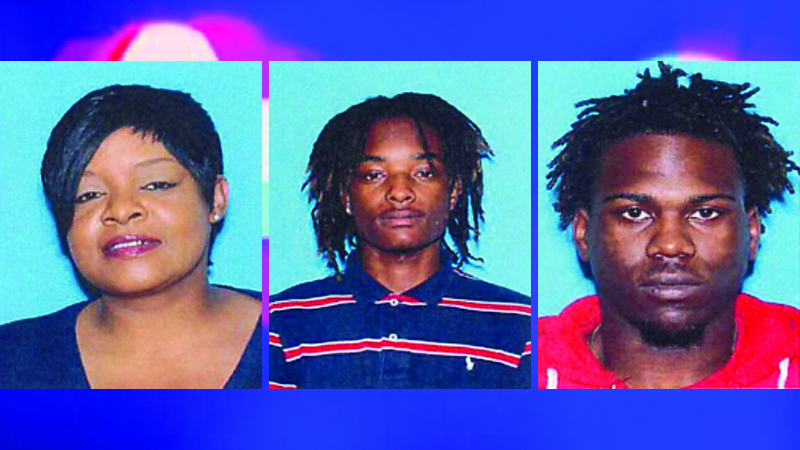 Cassandra Jones, left, has been charged with attempted murder and shooting into an unocuppied building. Kentreveious Washington, middle, and Adrian Richardson Jr., right, are wanted on the same charges for a shooting that injured a three-year-old.

A three-year-old Selma child was shot in the face Thursday night while in his mother’s arms.

“We think they were probably shooting at the mother and others that were there and hit the child,” Collier said.

One woman, Cassandra Jones, a school bus driver, has been arrested and charged with attempted murder and shooting into an unoccupied dwelling.

Two other suspects, 19-year-old Kentrevious Washington and 19-year-old Adrian Richardson Jr., are wanted by the Selma Police Department for the same charges.

The child was shot around 7 p.m. on the 1900 block of Marie Foster Street at an apartment complex. While the child is not believed to be the intended target, Collier said the shooting appears to be in retaliation.

“What we believe is there was a prior physical altercation between the child’s mother and Ms. Jones at some point that was physical,” Collier said. “We don’t see anything to justify retaliation sometime later involving guns.”

The injury to the child is non-life threatening, according to Collier.

“It doesn’t appear to be life threatening, but the child was flown to Birmingham last night,” he said. “They went straight to the hospital and didn’t call us. The hospital called us, and then by then the child was in Birmingham.”

Jones was taken into custody Friday morning after the department executed a search warrant at a residence on Primrose Terrace. Nearby schools were put on lockdown as a safety measure.

“We initially secured the house, and the house was vacant,” Collier said. “While we were on scene, Ms. Jones approached us. She actually drove at us, and one of the officers said that’s the vehicle that was involved yesterday, and of course we took her out at gunpoint.”

Collier said a 7.62 mm caliber rifle and .45 caliber pistol are believed to have been used in the drive-by shooting.

“The size of the weapons involved demonstrates how serious it is,” he said. “Given the severity of it, we took our time, planned a tactical operation and hit the house.”

Collier said the department is actively searching for the remaining two suspects.

Washington and Richardson are considered armed and dangerous. The Selma Police Department encourages anyone who knows of their whereabouts to call Crime Stoppers at 1-866-442-7463, the SPD Criminal Investigations Division at (334) 874-2125 or the secret witness line at (334) 874-2190.