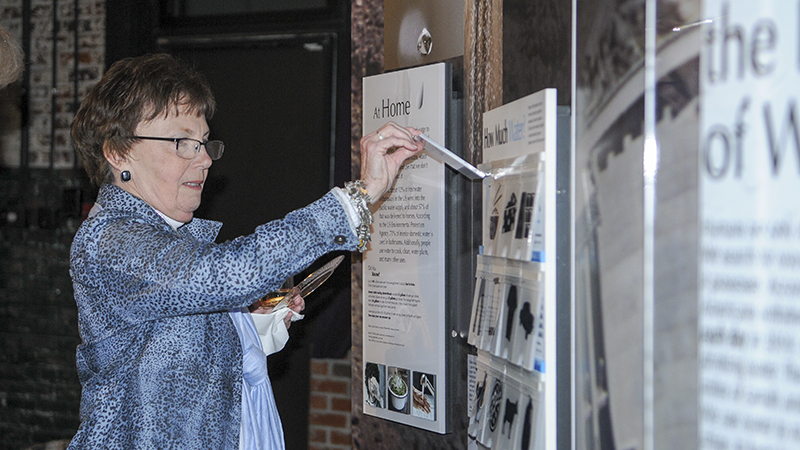 Ann Thomas looks at part of the Smithsonian’s Museum on Main Street “Water/Ways” exhibition Thursday night. The exhibit is now open to the public for viewing at ArtsRevive. (Blake Deshazo | Times-Journal)

A traveling Smithsonian exhibit examining water opened at the ArtsRevive Carneal Building Thursday night and is now open to the public.

The exhibit is called Water/Ways and looks at how water is used as a part of life environmentally, culturally and historically.

“We are so honored. It’s just a blessing,” said Becky Youngblood, executive director of ArtsRevive. “It’s been all over the nation.”

Selma was selected as one of six cities in the state of Alabama to host the exhibit, which has traveled all over the United States.

The exhibit will be open Wednesdays and Fridays from noon until 4 p.m. at ArtsRevive Carneal Building. It will also be open Friday and Saturday from 10 a.m. until 4 p.m. for the Pilgrimage.

Each part of the exhibit talks about different aspects of water.

“It’s the ways that we have influenced the waters both positively and negatively,” Youngblood said. “It talks about lots of different aspects of water. It talks about recycling, the purposes, pollution. It’s really interesting and educational.”

With Selma being on the river, Youngblood said it is a good opportunity for people to learn the benefits of have a waterway right in their own backyard.

As former ArtsRevive president Peggy Christian walked around and looked at the different parts of the exhibit Thursday night, one part that stood out to her explained how much water it takes to make items such as a car, a pair of pants, coffee and tea.

“It’s sort of mind boggling, all the different aspects they’ve used on this tour,” Christian said.

As she lifted up one of the cards, she read it takes nearly 40,000 gallons of water to produce a car. Another card revealed it takes around 2,000 gallons to make a pair of pants.

“It’s just unbelievable how much water it takes,” she said. “It’s something I never had thought about.”

The exhibit could also be the first of many if there is a good turnout for Water/Ways.

“It’s an honor and a privilege, and we need lots of people to attend,” Youngblood said. “Not only do we want them to attend because it’s fantastic, but if they see that we have a lot of numbers, they will send us other exhibitions in the future.

Martha Lockett, former executive director of ArtsRevive, was integral in bringing the exhibit to Selma. She said it was nearly a two-year process to get it here and up for people to view.

“The exciting part is that more can come, that they have opportunities to bring lots of wonderful things here,” Lockett said.

The exhibit will be open on the following dates:

Cook, author shares recipes at Lunch at the Library