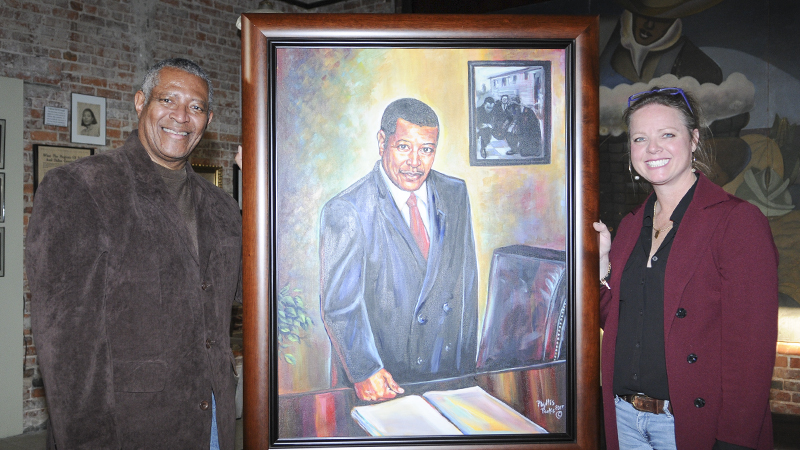 As Perkins walked around the room Wednesday afternoon he was humbled because photographs of civil rights giants like Dr. Martin Luther King Jr., Dr. F.D. Reese, Amelia Boynton-Robinson and others also hang on the wall in that same room.

“It’s really humbling because I don’t think about this kind of stuff, but to have people to think about it on my behalf and then be able to share it with this generation of children, it’s special,” Perkins said. “It really is.”

Perkins was elected mayor of Selma in 2000. He beat then Mayor Joe Smitherman, who had served a total of 35 years in office, in a run-off. Perkins served two terms as mayor.

Beth Spivey, curator of the Old Depot Museum, said recognizing Perkins as the first African-American mayor of Selma was something she felt moved to do because of its significance. She said getting his portrait hung in the museum has been a six-year process.

“I’m just so glad that it finally happened, and he is here to see it. It just makes me very happy. It’s very rewarding,” Spivey said.

“We don’t have to wait for people to die to recognize them. They’re still here. We have living, walking history standing beside us all the time, and I think we need to recognize it.”

After Spivey took over the museum, she said she reached out to people about just getting a photograph of Perkins to hang on the wall. She said a group of men at Perkins’ church, Ebenezer Missionary Baptist Church, wanted to honor him by getting a painting done.

“She called me for almost a year asking about a portrait, and I said okay, Beth, we’ll see what we can do,” Perkins said. “Finally, the Friends of the Trail cornered me, and they got a portrait from my wife, and the artist did the painting.”

Perkins said it was an honor for someone to want to recognize him and share his part in the city’s history.

“It’s an honor, and to be in this museum that really tells the whole story of Selma is very special,” Perkins said.

Perkins, along with members of Ebenezer, including a group of children, visited the museum Wednesday to see the portrait on the wall.

The children stood alongside Perkins, as members took photos of them in front of the painting.

“They’ll remember this, and it’s important to remember this … because what we don’t want to do is go back to where we were in my childhood,” Perkins said.

“What we want to do is empower them to understand that when I was their age, I was exactly where they are, but little did I know I would grow up one day to become mayor of this city.”

Althelstein Johnson, who Spivey said played a role in making the portrait a possibility, said she wanted the children of the church to see Perkins’ portrait on the wall because he is a part of history. Perkins serves as pastor at Ebenezer, where he succeeded Dr. F.D. Reese.