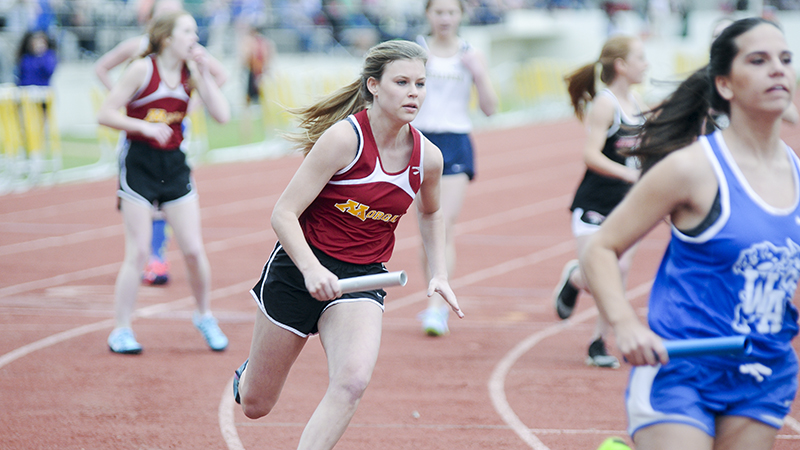 Morgan Academy’s Averee Adams takes off after receiving the baton from teammate Sarah Thomas in the 4-by-200 meter relay on Monday afternoon at Memorial Stadium.

The Morgan Academy track and field program hosted a massive AISA meet this past Monday with more than 15 schools showing up to compete in the various events.

“You’ve got just about all the schools in the state coming to one place at one time,” Morgan track coach Rob Robinson said. “It’s fun.”

In the Senators first meet of the season, 17 events were scheduled for both boys and girls competition. Teams from The Springwood School, Escambia Academy, Hooper Academy, Clarke Prep, Bessemer Academy and several other schools traveled to Memorial Stadium for the meet.

Robinson was surprised at how many teams showed up to the first meet of the year.

“I think we had 20 teams here,” he said. “The first three meets are for positioning. You find out what other teams have and who are the top teams in the state at what events.”

The ultimate goal is to get ready for the AISA state track meet, which is the only one that counts, according to Robinson. He will use the meets leading up to it to find his teams strengths, and determine what will give his team the best chance to compete at state.

“Track is unlike any other sport,” he said. “However many meets you want to be in, they’re just trying to get you to find out what your team is made of and who you want to be in that last [race]. That last one is the only one that counts for the state track meet.”

Here are the Morgan Academy results from the first AISA meet of the season:

The girls relay teams came in first place in both the 4-by-200 (1:56.5) and 4-by-100 relays (54.22). Emily Strickland, Sarah Thomas, Averee Adams and Peyton Ellen Granthum ran in both relays for the Senators. The next track and field meet for the Senators will be on Monday, March 12.