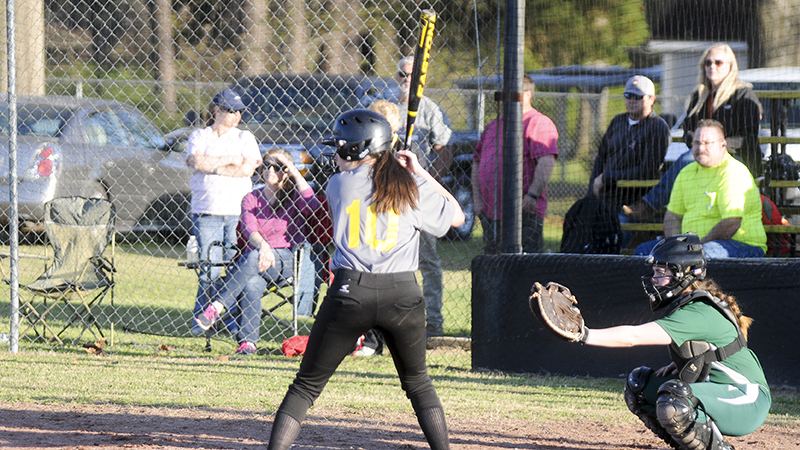 Meadowview’s Baylee House steps into the batters box in the seventh against Victory Baptist on Tuesday. The Lady Trojans lost 11-6 to the Lady Eagles, and are still looking for their first win this season.

The Meadowview Christian Lady Trojans softball team attempted to comeback from a six-run deficit in the last inning against the Victory Baptist Lady Eagles on Tuesday afternoon, but were only able to score one run before the game-ending flyout to center field.

The Lady Eagles won 11-6 and the Lady Trojans picked up their second loss of the season.

Despite the loss, softball head coach Raymond Robinson said that his team is getting better.

“We have a lot of new players. We only have five or six to return from last year,” he said. “Today, they all improved but we fell a little short on the bats. That’s what we have to work at.”

However, Robinson is looking forward to working with this group because of their willingness to get better.

“These girls have great attitudes about the game,” he said. “They’re willing to learn and willing to make sacrifices that it takes to have a team.”

The Lady Trojans play again on Thursday in Tuscaloosa.

On the other hand, the MCS baseball team extended their winning streak to three games on Tuesday afternoon against the Eagles with a 15-0 win.

Not only have they won their first three games of the season, but the team has also not allowed a run to any of their opponents. They defeated North River 10-0 in the season opener, when Jeremy Lee and Garrett Beech combined for a 15 strikeout and one hit performance from the mound. Lee also went a perfect 3-for-3 with a homerun in the game. The Trojans then defeated Conecuh Springs 18-0. Alex Colquitt and Zack Duke only allowed three hits and struck out eight.

The pitching dominance continued against the Eagles in Tuesday’s shutout. Colquitt only had to work three innings, but he kept the Eagles from getting past second base the whole game. He only recorded one strikeout, but his defense played well behind him. The Trojans even turned a rare triple play in the second inning.

The offensive run support came fast and early. The Trojans batted around the lineup in the first inning and scored seven runs. The game was called early since the Trojans had a 15-run lead after the third inning.

“We hit the ball really well in the first inning,” Gunter said. “Alex Colquitt pitched today and did an outstanding job.”