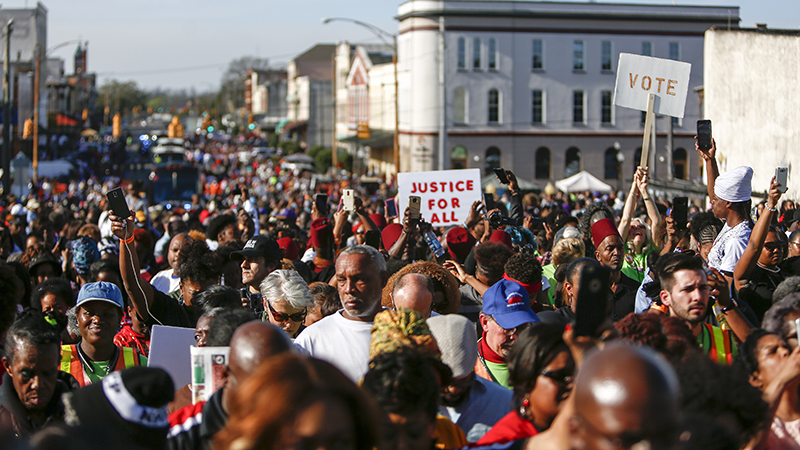 Thousands of people marched across the Edmund Pettus Bridge Sunday in commemoration of the 53rd anniversary of Bloody Sunday. (Alaina Denean Deshazo | Times-Journal)

Thousands of people marched across the Edmund Pettus Bridge Sunday afternoon to commemorate the 53rd anniversary of Bloody Sunday — a day where marchers were beaten, tear gassed and trampled while fighting for the right to vote on March 7, 1965.

Thousands make pilgrimage to Selma to march across Edmund Pettus Bridge in commemoration of Bloody Sunday from The Selma Times-Journal on Vimeo.

Marchers came from across the country to walk across the same bridge as the foot soldiers of the voting rights movement, who helped change history.

Vivianna Rodriguez came from Mobile, and this was her second time marching across the Edmund Pettus Bridge. Her first time was when President Barack Obama came to Selma in 2015 to commemorate the 50th anniversary of Bloody Sunday.

“It’s very breathtaking to cross the same bridge five feet away from John Lewis, and just being able to do this, it’s unexpressable,” Rodriguez said Sunday after making it back across the bridge.

Rodriguez is part of the Alabama Coalition for Immigrant Justice, and for her, walking across the bridge was personal.

“For me it’s a little bit more personal just because of all that’s going on in politics right now with immigrants’ rights,” she said.

“This is very inspiring. The foot soldiers that did come out here and did the hard work, and also the ones who lost their lives, they laid down a great pathway for us as other activists. As our rights are being attacked, it gives us courage and inspires us to walk in their same footsteps because they paved the road.”

Shirley Gavin Floyd, from Birmingham, has been coming to commemorate Bloody Sunday for a number of years.

“I make a point to come down here and enhance and promote civil rights here in Selma as well as in Birmingham,” Floyd said.

Floyd said as she crosses the bridge, she can feel the spirit of the many foot soldiers that fought for the right to vote.

“It means that the spirit of all those foot soldiers who crossed this bridge has not died,” she said. “When I step up on this bridge, I literally feel their spirit come up out of this concrete. When I come up on this bridge, it’s sacred, hallow ground for me, and it’s not to be taken lightly.”

Floyd marched Sunday with David Russell, who is also from Birmingham. Russell marches from Selma to Montgomery every few years.

“I’ve been marching since 1986. I’ve been involved in the movement for over 30 years, and it just means so much to me,” Russell said. “This is not just about marching across the bridge. It’s much bigger than that.”

This year’s bridge crossing not only commemorated Bloody Sunday, but it also paid tribute to the 50th anniversary of the death of Dr. Martin Luther King. Jr.