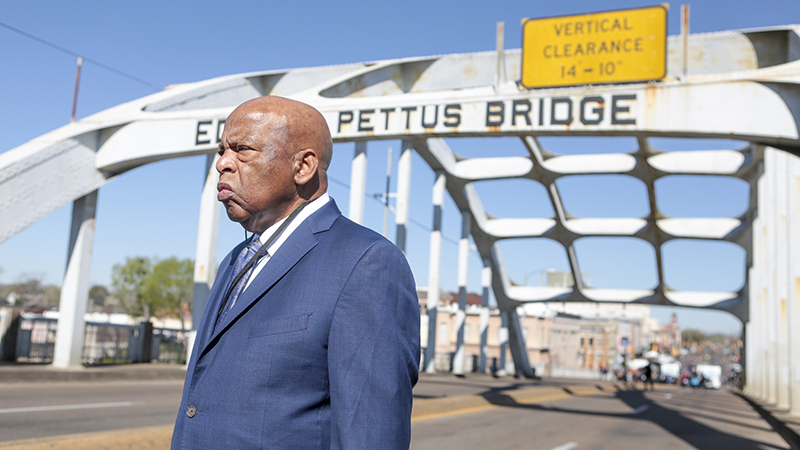 One by one, members of the Faith and Politics Institute smiled for a photo atop of the Edmund Pettus Bridge Sunday morning with Congressman John Lewis, who remembers all too well what took place there 53 years ago on Bloody Sunday.

“I remember it very, very well,” Lewis said. “It’s like it was yesterday.”

Lewis, who was brutally beaten on March 7, 1965, as marchers attempted to march from Selma to Montgomery to fight for the right to vote, led a group of politicians on a civil rights pilgrimage to Selma.

“It’s very meaningful to come back here, to come back to this historic site and be here with so many wonderful people. It’s a beautiful day here today in Selma,” Lewis said as he was surrounded by his peers.

Each year, Lewis returns to Selma to share his story and inspire others.

“We walked from Brown Chapel [AME] Church to the bridge, and we looked over and saw the state troopers and Sheriff [Jim] Clark’s posse, men on horseback,” Lewis recalled.

“I can remember Major John Cloud saying this was an unlawful march, it will not be allowed to continue. I’ll give you three minutes to disperse, return to your homes or to your church.”

Lewis said he could remember the lawmen putting on their gas masks and coming toward the marchers.

“The rest is history,” Lewis said.

Lewis was joined by members of congress from across the United States.

“This is about a day of honoring the marchers and those people who fought for freedom, who fought for liberty, fought for the right to vote and paved the blueprint for what needs to happen in our country to always fight for the best of who we are,” said U.S. Sen. Kamala Harris from California.

Harris was a speaker at Sunday morning’s Martin and Coretta King Unity Breakfast. Harris said she felt a mixture of emotions walking across the bridge with Lewis and others.

“It’s bittersweet. It’s sadness and pain at the thought of what they endured 53 years ago, but it’s also inspiration about again fighting for the best of who we are and honoring those who have been heroes and are still heroes,” Harris said.

U.S. Sen. Doug Jones, who changed the political landscape in the state of Alabama in December, was also among the group to walk across the bridge.

“It means everything. It is so symbolic of where we need to be in America, the lessons that were fought for here and that we need to take back, we need to take to Washington and to everywhere in this country dignity, respect, equality,” Jones said. “I’m just humbled to be here.”

The congressmen and women were joined by Martin Luther King III and his family, as well as the wife one of his father’s closest friends, Juanita Abernathy. Abernathy’s husband, Ralph Abernathy, who died in 1990, was a leader of the Civil Rights Movement and succeeded Dr. King as president of the Southern Christian Leadership Conference.

After spending some time on the bridge, the delegation went to Brown Chapel AME Church for morning service, which was the starting point for the 1965 marches.

Members of Congress speak at Martin and Coretta King…