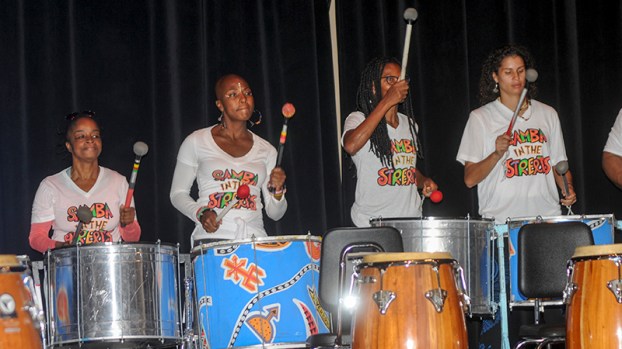 Viver Brasil Dance Company ignited the School of Discovery stage Saturday with its Samba in the Streets workshop. Community members of all ages were asked to join the group on stage for some drumming fun.

As a part of their “Samba in the Streets: Alabama Tour,” the organization stopped in Selma during Jubilee weekend to dance and create music with the community.

Linda Yudin, founder and artistic director of Viver Brasil, said the free Samba in the Streets classes and lectures are a way to introduce and educate people on Afro Brazilian culture.

Afro Brazilian culture and heritage is at the core of the 21-year-old Los Angeles based organization, according to Yudin.

“Our mission is to preserve and manifest both traditional and contemporary forms of Afro Brazilian dance and music,” Yudin said.

“We want to bring joy, because these African forms are about joy, they’re about building community, they’re about instilling pride in African descendent culture,” Yudin said.

In February, as a part of the tour, they traveled to Birmingham and offered free Samba in the Streets workshops as well.   Yudin said it was an honor to visit places that have such rich history in the Civil Rights Movement.

“We felt that coming to the birthplaces of the Civil Rights Movement in the United States was an appropriate way for us to honor our ancestry in Salvador, Bahia, Brazil,” Yudin said.

They also performed Friday night at the St. Paul United Methodist Church Fellowship Hall and at the Freedom Flame Awards Gala at the Carl Morgan Convention Center. Their last performances in Selma is Sunday, March 4 at the post-march rally of the Bridge Crossing Jubilee at the foot of the Edmund Pettus Bridge.

They will also host Samba in the Streets workshops in Lowndes County schools on March 5 and 6.

The Dallas County Courthouse courtroom was filled to capacity on Saturday morning in Selma for the Intergenerational Summit panel discussion... read more