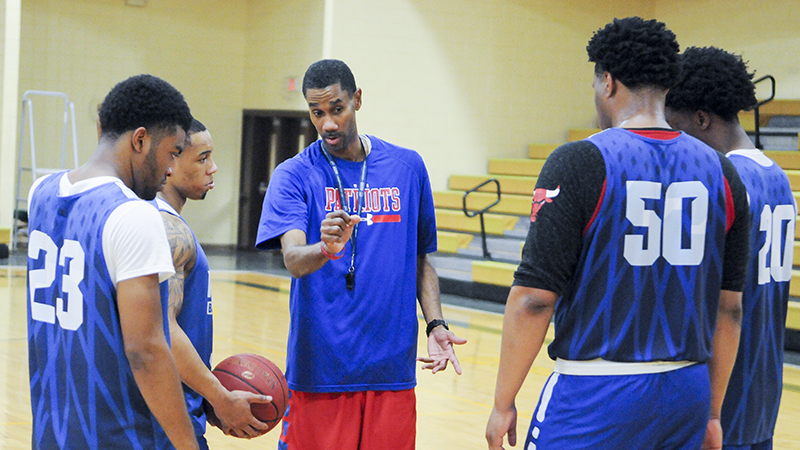 WCCS head coach Duane Evans goes over the strategy in the huddle at the Patriots practice on Thursday afternoon.

The Wallace Community College Selma men’s basketball team (18-16) ran a light practice Thursday afternoon at the Concordia College Alabama gym, where they’ll be playing in the opening round of the ACCC tournament on Saturday.

WCCS is having its best season in a while and earned the chance to host the first round game this season. They are playing on CCA’s court due to the Jubilee preparations occupying their home court. Last season, the Patriots had to go on the road when it was time for tournament play. According to WCCS head coach Duane Evans, being at home is a welcomed opportunity.

The men finished the season in fourth place in the South division of the Alabama Community College Conference with an 9-5 conference record, according to WCCS athletic director Marcus Hannah. The team hasn’t had a winning conference record in several seasons.

“This has been the best season, conference wise, since 1999,” Hannah said. “Coach Evans has been getting good kids to participate in the program. He’s done an excellent job. We’d also like to give thanks to Dr. James Mitchell, our president, for giving us the resources and the funding to make these things happen.”

“We’ve gotten to know each other’s tendencies a little bit better and we understand what we’re trying to do as a team,” Evans said. “At this time, we’re realizing who we really are as a team and we’ve had a lot of success lately.”

The Patriots will play the Gadsden State Community College Cardinals at 4 p.m. in the first-round game. The Patriots split its two regular season games against the Cardinals, but the outcome of this game determines if their season ends or if they advance.

“They’ve got some athletic guys that can play, but we’re going to just stick to our game plan and what we’ve done the entire season,” Evans said.

The winner of Saturday’s game moves on to the next round at Lawson State Community College in Birmingham. Hannah said the local support for the Patriots has been great and would mean a lot for their playoff game.

“That atmosphere has been great,” he said. “We’ve gotten great support from students and faculty. We just want to make sure we continue this trend, and I’m sure coach Evans and his staff are going to continue to do an excellent job.”