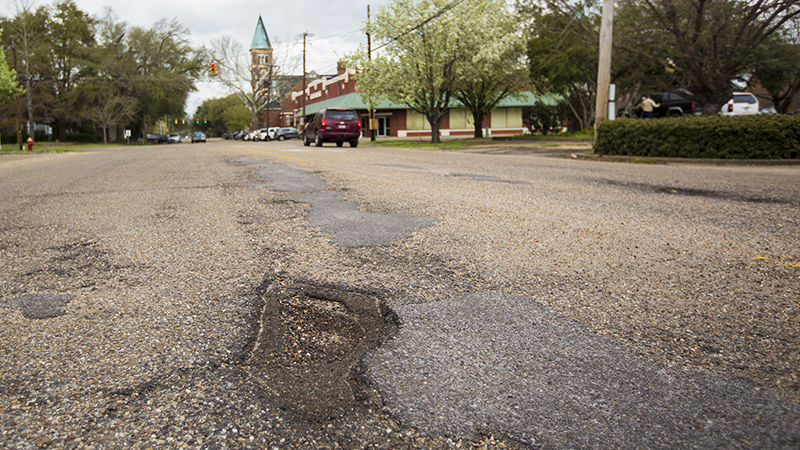 This pothole on Church Street is one of many in Selma that cannot be filled due to the city’s pothole truck being down. (Alaina Denean Deshazo | Times-Journal)

Roads throughout Selma are in need of mending due to a recurring pothole problem caused by unusual weather, construction and the temporary absence of the city’s pothole truck.

The city of Selma’s pothole truck has been down due to unforeseen issues with its fuel pump. While the truck has been out of service, public officials have been looking for solutions to fix potholes that seem to keep appearing.

However, Selma’s pothole issues do not stop with the absence of their truck. The temporary solutions adopted by both the city and county governments, such as filling in the potholes with gravel and sand, are running into obstacles as well because of the continuous rainy weather and uncommon temperatures for the area. The heavy rain causes the temporary pothole material to become detached.

According to Sean VanDiver, director of code enforcement, it has been 20 to 40 years since the city had an overhaul of its infrastructure. Part of this reason is due to lack of funds to fix the problem for the long-term.

However, VanDiver has voiced his desire to work with the Selma City Council, who holds the city purse, to find new ways to generate revenue for this cause.

“I don’t want to continue to put Band-Aids on an infrastructure problem,” VanDiver said. “We are discussing new ways to get new revenue so we can repair these streets. We need capital funds for capital equipment.”

Long-term solutions have also been hindered by complications and miscommunications with companies who produce asphalt. Asphalt, which is more effective at keeping the potholes filled, cannot be poured during certain conditions that Selma has endured during the winter months.

According to VanDiver, the unpredictable weather and the specifics regarding asphalt have caused snags between when asphalt producers can provide their services.

This has caused issues for the county as well, who has a working pothole truck, but cannot get enough access to asphalt to help combat the many potholes located throughout Dallas County.

According to Kim Ballard, probate judge of Dallas County, the truck does not slow the problem enough to make a difference.

Multiple people have brought forth claims to the county stating that their vehicles have been damaged as a result of these potholes.

“We have had legitimate claims come forth because of this. We have been averaging at least two or three a month, and that is more than usual,” Ballard said. “The county is having worse problems than ever before, and it is not just us. Every county has the same problem. We are trying our best, we just need better weather.”

With warmer spring weather approaching, both Ballard and VanDiver hope for good fortune so they can work to fix this problem. While Ballard has said grievenaces have been filed as a result of the various potholes, VanDiver says the city has not seen a noticeable spike in claims regarding vehicle damage.

The return of the city’s pothole truck to full operation is unknown.