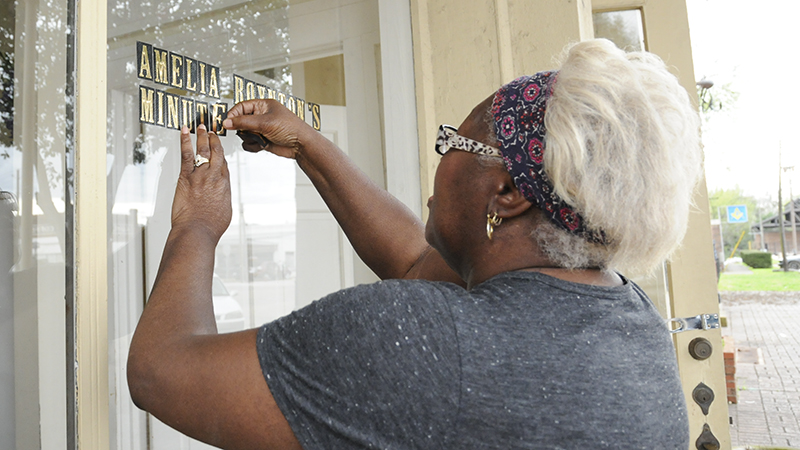 Betty Boynton places stickers on the front window of the Amelia Boynton Minute Museum Monday afternoon. The museum will be open for Jubilee and is located on Water Avenue next to Organpi. (Blake Deshazo | Times-Journal)

Bruce Boynton and his wife Betty are opening a museum in honor of his mother, Amelia Boynton-Robinson for Jubilee.

The museum, located on Water Avenue next to Organpi, is called the “Amelia Boynton Minute Museum.” Admission is $5 per person and includes photos, awards and other memorabilia from her work in civil rights and the voting rights movement.

“She’s done so many outstanding things that a lot of people don’t know,” Bruce said of his mother.

Bruce said the museum is something they have been planning to do for a long time to pay tribute to his mother and educate people about her role in the movement.

Boynton-Robinson, known by many as the “Matriarch of the Voting Rights Movement,” dedicated much of her life to fighting for civil rights.

She joined her husband, Samuel Boynton in Selma in 1930, where she was determined to get African Americans registered to vote.

“She came to Selma in 1930 as a home demonstration agent, which she was his (Sam’s) co-worker,” Bruce said. “Her job was to work with the black women in the county and rural area teaching more up to date things in housekeeping.”

But she was also dedicated to voting rights.

Boynton-Robinson, a member of the brave Courageous Eight, was one of the first African Americans registered to vote in Alabama, but she did not hesitate to continue fighting for the rights of others to participate in the political process.

One of the most vivid images the world has of Boynton-Robinson is from Bloody Sunday, when she was one of many peaceful marchers beaten at the foot of the Edmund Pettus Bridge, as they set off to Montgomery.

Almost five months to the day when marchers were brutally beaten on the bridge, Boynton-Robinson was invited to see President Lyndon B. Johnson sign the Voting Rights Act August 6, 1965, giving everyone, regardless of their skin color, the right to vote.

“She’s done so many outstanding things that a lot of people don’t know,” Bruce said. “For example, there were 21 congressmen who came from Washington, D.C. after Bloody Sunday. They were all at my mother’s house, and while there, they did the first draft of the Voting Rights Act.”

Bruce said he hopes to educate people who visit Selma for Jubilee about his mother’s role in the movement and all of the many things she did during her life.