Johnston spreads awareness for civil rights a step at a time 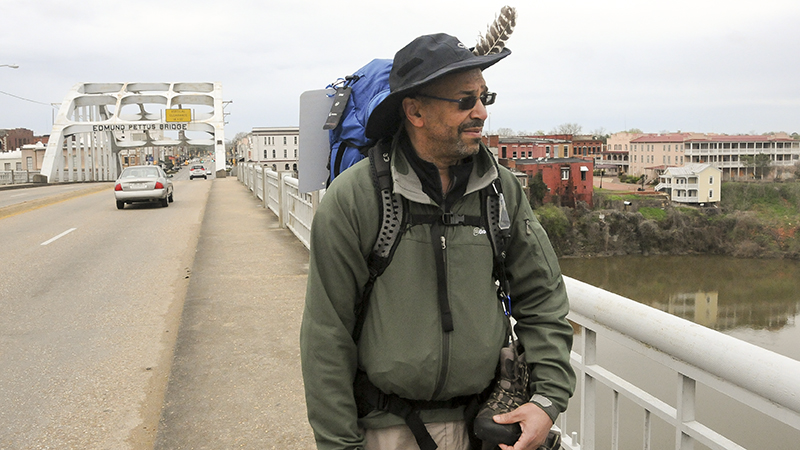 Ken Johnston began the first leg of his “Walk to Freedom” this past Sunday by walking over the Edmund Pettus Bridge.

On an overcast Sunday afternoon in Selma, a visitor with a 30-pound back pack, an extra pair of water-proof hiking boots and an owl feather in his hat took the first steps on his 400-mile trek to Memphis, Tennessee.

Ken Johnston, a 57-year old, amateur long-distance walker from Amherst, Massachusetts, spent the morning as a guest at Brown Chapel A.M.E. The church that was the starting point for the Selma to Montgomery voting rights marches in 1965 is where Johnston chose to begin his “Walk to Freedom.”

“‘Walk to Freedom’ is a way of paying homage to the legacy of Dr. Martin Luther King Jr., and I wanted to look at how I could give back to that legacy in some small way to help civil rights move forward,” Johnston said. “I wanted to use walking as a way of encouraging people to remember the legacy of Dr. King, who encouraged people to get out and walk through the Selma to Montgomery marches.”

After service ended, the members of Brown Chapel invited Johnston to stick around a little while longer for a quick lunch before he started his journey. They filled his plate with chicken, dressing, cabbage and green beans to fill him up.

Once he finished his meal and wrapped up his conversations, Johnston found a spot near the door to stretch. He took a seat on a small bench under a portrait of Dr. King to tie his shoes before he began to make his way towards the Edmund Pettus Bridge on his way to his first stop in Montgomery. 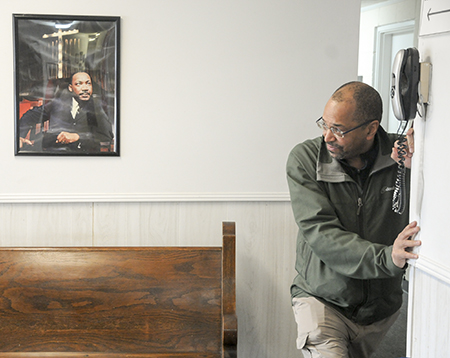 Johnston stretches in the halls of Brown Chapel A.M.E before starting on his walk.

Johnston’s “Walk to Freedom” will take approximately 37 days and he will walk through 18 counties and 28 townships through Alabama, Mississippi and Tennessee. Johnston, who has never been to Alabama before, is taking the long route to Memphis so he can stop through the cities like Birmingham and Montgomery, which are major landmarks in the history of the Civil Rights Movement.

“Selma, Montgomery, Birmingham and Memphis are the civil rights hubs, so to speak,” he said. “People look to these cities as being leaders for civil rights and addressing civil rights, so that’s why it was important to me to go there.”

The idea for the “Walk to Freedom,” first came to Johnston after he completed his first long-distance walk across his home state of Massachusetts. A personal achievement motivated by a desire to improve his own health. Once he completed his goal, he wanted to keep going and needed another challenge.

Initially, he wanted to trace the path of the Underground Railroad from New Orleans, Louisiana, all the way to Canada. But while researching other potential options, Johnston found that the National Civil Rights Museum’s website was looking for partners to participate in the upcoming 50th commemoration of Dr. King’s assassination.

“I submitted a unique, solo-walking journey proposal to them,” he said. “To my surprise, they got back to me in late December and said your proposal is accepted.”

Johnston’s proposal earned him an opportunity to share his journey and experiences at the “MLK50: Where Do We Go From Here” symposium at the National Civil Rights Museum in Memphis, Tennessee. The symposium, which begins on Monday, April 2, will address the state of civil and human rights issues and racial and economic equality. The two-day symposium will conclude with a commemorative ceremony in honor of the 50th anniversary of Dr. King’s assassination at the Lorraine Motel.

The ongoing fight for civil rights means a lot to Johnston, and that’s one of the main reasons for this walk.  The civil rights movement resonated with people beyond the Southeast, and still does today.

“The message that I’m receiving from people about how important this is has reached a point where I feel like this walk is getting bigger than me,” Johnston said. “People have some very strong feelings about civil rights, and they don’t want to see them go away.”

Even today, Johnston still sees issues of civil rights that are vulnerable. He witnessed first-hand how the lack of attention to civil rights for people with disabilities had an effect on his daughter Patricia Vincent’s life.

“As parents, we fought very hard for her civil rights through the American Disabilities Act (ADA),” Johnston said. “Just recently, Congress passed a new law that really watered down that act and made it much harder for people with disabilities to prove that their civil rights had been violated or that they’d been discriminated against. That’s just one example of how it’s changing today.”

Vincent was deaf, blind and had severe cerebral palsy, so she required assistance for all of her daily living needs. According to Johnston, the ADA allowed Vincent to access services that met her needs while she was in school.

“What we discovered as parents was that one year she would receive a certain service,” he said. “Then the following year, we’d go back to the school district when it was time to renew her IET, but that service was no longer available because the law had changed slightly during the course of the year and the school district didn’t have to provide those services anymore.”

Without access to the communications help that she needed, the lack of services made Vincent’s life that much more difficult. Vincent passed away 10 years ago at the age of 21. Johnston’s experience with his daughter is an example of how civil rights issues aren’t just about Black versus White. There are a variety of issues spanning from voting rights to women’s rights that require constant attention, so that they aren’t brushed to the side.

“I’m not an expert on civil rights, but I do know how they impact people’s lives every day,” Johnston said. “And I care about that. I care about how they change the way we live, so it’s important to preserve them and speak up about them.”

Gus Martins, Johnston’s good friend and old college roommate from his time at the University of Massachusetts at Amherst, thought his idea to walk across the South was “insane.”

“He’s my good friend and we speak regularly, so there’s a bit of insanity in that,” Martins said. “I didn’t think there was enough time for proper organization. The only thing I worried about was whether or not he had enough time to do it. I know he has the commitment to do it, and I know when he puts his mind to something he gets it done.”

Martins describes his friend as a man concerned about his country. Martins has gotten to know Johnston as an organizer who will take it upon himself to recognize a need and then execute a plan to resolve the issue. 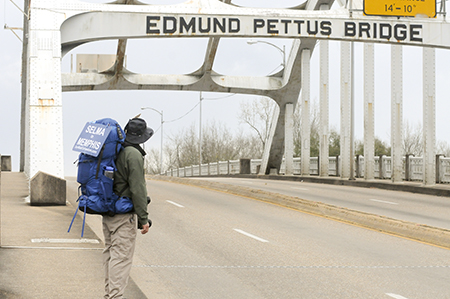 Johnston reflects on the Edmund Pettus Bridge before crossing over on his way to Montgomery.

“He’s definitely in touch with his community and his country,” Martins said. “I think he worries when he sees a country that always seems to be in turmoil.”

As an added bonus to his walk, Johnston hopes to encourage people to lead more active lifestyles. Johnston wanted to combine activism with a positive health outcome. Major moments in civil rights history like The Million Man March and the infamous Bloody Sunday march in Selma involved simply walking together for a cause. One of his goals is to inspire people to continue walking for their own personal benefit as well.

“Today many Americans live relatively sedentary lives,” he said in a news release. “Walk To Freedom hopes to encourage the discussion of walking as a way for people to improve overall health.”

Four days into his trek, Johnston and all of his gear has made it safely to Montgomery. Since he’s taking this walk on alone, Johnston has packed his backpack with all of the essentials for his trip, including his tent, food and water. Most nights, he will be camping out. But he is looking for host families that would be open to helping him on his way. Johnston sacrificed a lot to go on this walk. He left his job in marketing at Yankee Candle, but his health and his cause were worth taking the risk.

“I’m giving up a lot to do this walk, but it means that much to me,” he said. “I just feel that it’s something that people needed to be reminded about. How precious our civil rights are.”

During his walk, Johnston is taking in every bit of the experience. He said he wants to speak with people and engage in conversations about civil rights with people he meets along his path. For more information on Johnston and his journey, go to ourwalktofreedom.com. His fundraising goal for the trip is set at $5,500 on his gofundme.com page, and as of this past Wednesday he’s raised $2,060.

Johnston has approximately 345 miles left to go. He will continue along the U.S. Civil Rights Trail on to Birmingham once he leaves Montgomery. As he continues along the side of the road with the blue “Selma to Memphis” sign hoisted on his back, Johnston provides a step-by-step reminder of the good that can come from walking for a cause.

“The spirit of volunteerism and community is a great thing that we need to always cherish and always work towards, because it makes us a better country,” Martins said. “It makes us better people, and that’s where Ken really connects.”