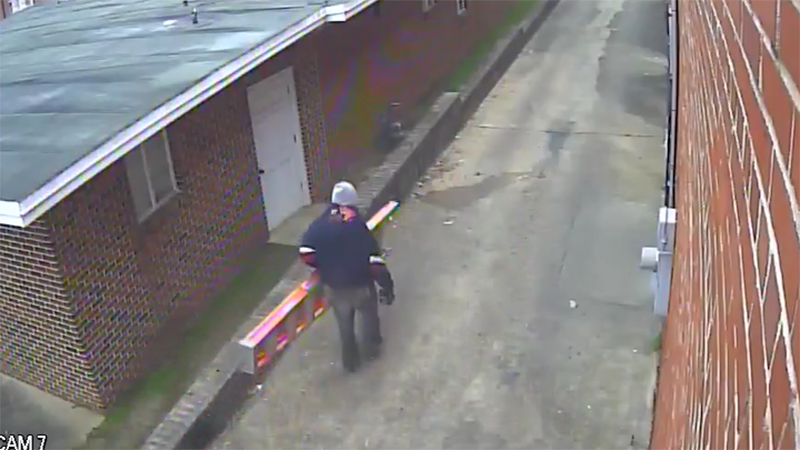 Jeffrey Tomlinson’s ladder was stolen by this man caught on Goodwill security cameras.

A local resident of Selma cleaning up the town was caught in a bind when his ladder was stolen right from under his nose. Cleaning, sweeping and raking up the parking lot next to the Goodwill located on Broad Street, Jeffrey Tomlinson was using the ladder to dump the trash into the dumpster.

However, a quick 30-second break away from his volunteer cleaning left a large enough window for a culprit to sneak behind the scenes and steal the ladder while Tomlinson was looking the other way.

Man steals ladder from good samaritan cleaning up a parking lot from The Selma Times-Journal on Vimeo.

By the time Tomlinson returned to finish his work, he found the ladder had disappeared out of thin air.

But while the ladder may have been stolen from under his nose, the perpetrator has been caught on security footage thanks to a few cameras on the back of the Goodwill building.

On video, the man is seen sneaking behind Tomlinson a few seconds after Tomlinson walks out of view on the screen. After posting up behind the dumpster, he made his move to snag the ladder and disappears into a nearby alley before Tomlinson even knows what is going on.

The alley footage shows the man dropping the ladder off on the side behind a ledge, hiding it to presumably come back to it later.

Tomlinson runs down the alley right past the ladder, not seeing its hiding spot or the culprit of the attempted theft.

The man’s face is never shown in the footage, keeping his head turned away from the camera the majority of the time. He is dressed in a hooded sweatshirt with the hood up, blocking his face in the few moments the side of his head is shown on camera.

A few Goodwill employees located the ladder after checking the camera once the situation was brought to their attention.

While the suspect is unknown, both Tomlinson and the Goodwill employees have a hunch that it is a local resident who has been known to hang out for days on end outside Goodwill and steal donated items once it closes.

Although the man who stole the ladder may be different than the man known to steal Goodwill donations, public relations director of Goodwill Industries’ Central Alabama locations Taylor Dunn states that acts like these are detrimental towards what they wish to accomplish.

“We are very disappointed someone would steal from Mr. Tomlinson on our property. Now people who are stealing from us are impacting those in the community as well. Jeffrey is a man trying to help Goodwill and his community,” Dunn said. “Without donations, we are not able to provide jobs placement and training to those with disabilities. Unfortunately, we have an issue with people stealing donations after hours.”

The Selma Goodwill is located on 1011 Furniss Ave. right off of Broad St. While Tomlinson has received his ladder and will continue to help the community, the Goodwill’s thievery problem still remains.