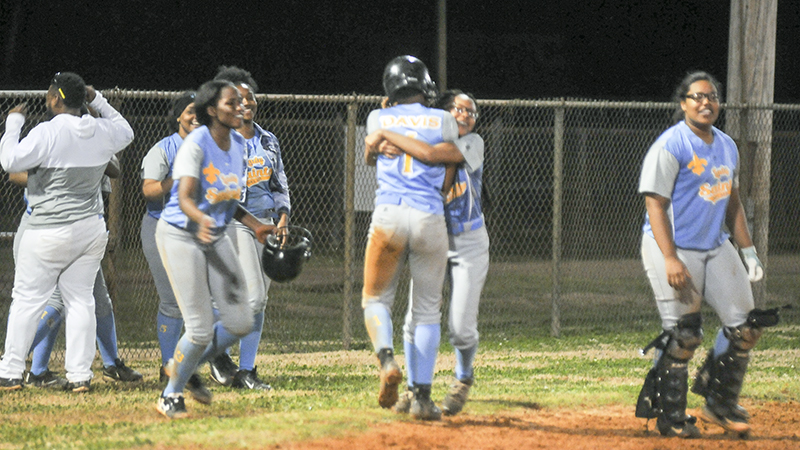 Selma’s Mariah Davis is hugged by her teammates after she delivered the game-winning hit in the Lady Saints 16-15 win over the Dallas County Lady Hornets on Tuesday night.

The Selma High Lady Saints softball team was down to its last out and trailing 15-13 on Tuesday night at the Selma Softball Complex. A throwing error by the Dallas County Lady Hornets pitcher allowed the runners on first and second base to score while the tying run advanced to third base. Selma’s Mariah Davis stepped to the plate and hit a walk-off grounder to the shortstop that gave the Lady Saints the 16-15 win for their first victory of the season.

“They put their all into it,” Selma High head coach Kristy Bettis said. “They pushed through and I’m proud.”

The Lady Saints, who trailed their county rivals by as much as seven runs, clawed their way back into the game inning by inning.

Timely hits and inning extending errors by the Hornets kept the Lady Saints in the ball game.

The Lady Hornets reached base on seven walks in the top of the fourth and the couple of hits that they did get helped grow the lead to 11-4. Dallas County catcher Morgan Krumnow had a two-RBI double, but she was thrown out trying to stretch it into a triple.

Despite being down, Selma began their rally. The Lady Saints answered with four runs in the bottom of the fourth inning with the help of four walks and a two-RBI double by Arianna Quiala.

The Lady Hornets extended their lead to 13-8 in the top of the fifth, but Selma continued to chip away. In the bottom of the sixth inning, Alisha Thomas tied the game at 13 with an RBI single.

The Lady Hornets scored two more in the top of the seventh on an error by the Lady Saints, but their defense was unable to get the final three outs before the Lady Saints completed their comeback.

Selma High is 1-2 to start the season, and their next game is against Southside High School on Thursday, March 1 at the Selma Softball Complex at 4 p.m.

Dallas County is 1-1 and their next game is a home game against Paul Bryant on Thursday.