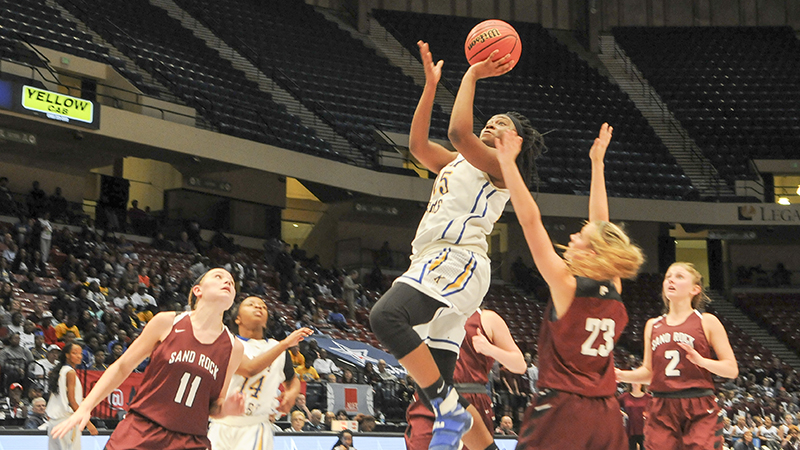 Keith’s Shatavia Moore breaks through the Sand Rock defense for a layup in the Lady Bears 62-45 loss Monday night in the Class 2A Final Four at the BJCC in Birmingham.

The Keith High School Lady Bears’ playoff run came to an end Monday evening in the AHSAA Class 2A state semi-final game at the BJCC in Birmingham.

“I’m proud of my girls for making it this far through the season,” Keith head coach Cecil Williams said. “I want to take my hat off to Sand Rock. They executed their game plan well.”

The Lady Bears were just a win away from the state championship game, but were defeated 62-45 by the Sand Rock Lady Bobcats.

It was a tough, emotional loss for the Keith girls because they were in the game for so long. The game was tightly contested for three quarters, and then the offense was shut down in the fourth. The Lady Bobcats simply outlasted the Lady Bears in a fiercely competitive game.

Both teams were evenly matched in the first half.

Keith guard Jakyra Simmons scored the opening basket for the Lady Bears, as she often does, with a 3-pointer on their first possession of the game. The Lady Bears scored the first five points of the game before the Lady Bobcats answered with a run of their own. Both teams had an emphasis of working inside, but Sand Rock was able to get to the free throw line and capitalize.

In the first quarter, the Lady Bobcats made five of their six free throw attempts to help pad their early lead. Sand Rock led 17-13 going into the second quarter.

The Lady Bears took advantage of Sand Rock leaving their full court trap in the second quarter and outscored the Lady Bobcats 15-10. The lack of pressure made room for Keith forward Shatavia Moore to drive inside and score inside the paint. Moore finished the game with 13 points and 9 rebounds. In addition to Moore’s scoring, Keith guard Ambreya Snow led the team with 16 points.

The Lady Bears went into halftime with a 28-27 lead.

In the third quarter, Sand Rock and Keith traded punches again. Both teams made five field goals and missed all of their 3-point attempts, but the difference once again came at the free throw line. Keith made their only attempt, but Sand Rock made four on six chances. Free throws ended up being a big part of the game. The Lady Bobcats had 22 attempts at the end of the game compared to Keith’s 11.

The turning point of the game finally came in the fourth quarter. Moore, who was the central region tournament’s MVP, was double-teamed more aggressively.

“[Shatavia Moore] is good and we just had to contain her,” Sand Rock head coach Lisa Bates said. “The game plan was double team [Moore] until she gave it up.”

Sand Rock’s pressure defense led to turnovers, and the Lady Bears struggled to find points in the fourth quarter. Ultimately, Keith’s 24 turnovers hindered their chances of winning and advancing to the next round. Keith was outscored 21-6 in the final period. Sand Rock had three players scoring in double-digits in the game. Kirby DeBoard led the team with 20 points, while Savannah Blackwell and Kynleigh Chestnut finished with 17 and 10 respectively.

The Lady Bears came a long way this season.

“We learned to grow together, communicate better and help each other out” Simmons said.

Despite the pain of the loss, the Lady Bears fought all the way until the end.