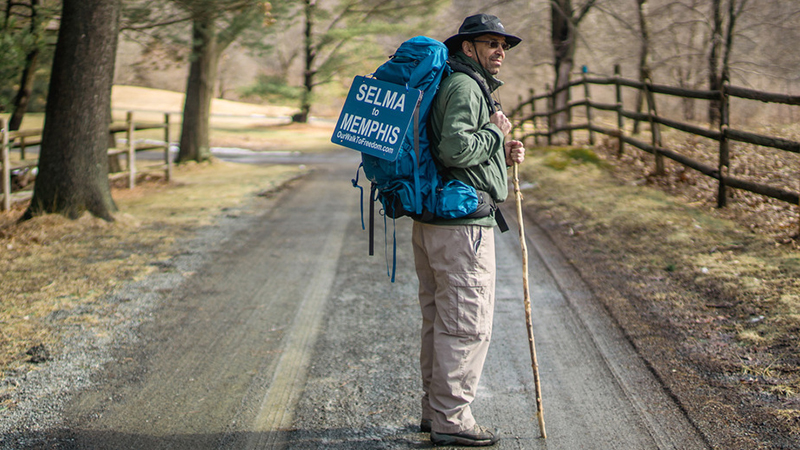 Long-distance walker Ken Johnston will begin his 400-mile journey to Memphis, Tennessee on Sunday afternoon to spread awareness about the health benefits of walking and to honor the life of Dr. Martin Luther King Jr. (Photo: Paul Reitano)

Ken Johnston, a 57-year old man from Massachusetts who has never visited Alabama, has come to Selma to begin a 400-mile walk to Memphis, Tennessee, to participate in the ceremonies commemorating the 50th anniversary of Dr. Martin Luther King Jr.’s assassination.

His “Walk to Freedom,” which he will begin on Sunday, Feb. 25 after service at Brown Chapel A.M.E. Church is an awareness campaign to celebrate the life of Dr. King and bring attention to the health benefits of walking.

He hopes that his walk will open discussions and encourage people to consider a more active lifestyle. And walking, is an easy way to start.

Johnston’s “Walk to Freedom” will follow the U.S. Civil Rights Trail from Selma to Montgomery, then trace the Underground Railroad up through Birmingham and on to Memphis. He’ll cross 18 counties and 28 townships on his way through Alabama, Mississippi and Tennessee. His goal is to cover approximately 100 miles a week in order to make it into Memphis by April 2 for the MLK50: Where Do We Go From Here? Symposium, where he’s scheduled to speak.

Johnston will be carrying everything he needs in his backpack on his trek. Even though he’s taking on this challenging task alone, he welcomes anyone who wants to join him for a spell or learn about his journey. He’s willing to stop and meet with churches, schools, organizations and anyone else who is interested in his cause.

“I’m doing this walk to promote movement as part of everyday healthy living,” he said in the release. “I see this journey as generating a series of questions and observations about the barriers that prevent people from enjoying the great outdoors. I look forward to sharing stories about my long-distance walking experience with civic groups and area schools during my walk and upon my return.”

Johnston is prepared for his solo walk, but there are several ways to help contribute to his cause. For more information about his journey and to donate to his cause, visit his blog at ourwalktofreedom.com.

Organizations who wish to invite him to speak to their group or anyone who is willing to serve as a host family during his journey can email him directly at kjohnston16@yahoo.com.

“I’m trying to network with community groups, schools, churches and individuals in the Selma, Benton and Lowndesboro areas that would be open to serving as a host family for one night only as I journey from Selma to Montgomery,” he stated.

A full profile about Johnston and his incredible journey will be featured later this week.