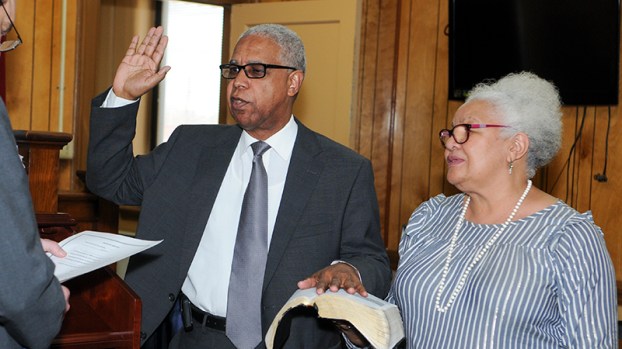 Major Madison Jr. raises his right hand and places his other on a Bible held by his wife, Benita, Friday as he takes his oath of office. He was sworn in as a new municipal judge for the city of Selma. (Blake Deshazo | Times-Journal)

Major Madison Jr. was sworn in as municipal judge for the city of Selma Friday afternoon.

Madison, who served as a prosecutor in the court, was appointed by the Selma City Council last week.

“It’s all at once gratifying, exciting and humbling because this position is more than about a title. It’s about the community,” Madison said.

“For most people, their first impression of justice or law happens right here in municipal court, so that’s important to me that they feel they’re being treated justly and fairly.”

The new judge took his oath of office in front of family and friends and was sworn-in by presiding municipal Judge Joseph H. Hagood III.

“It’s a tremendous honor. He’s been the prosecutor in this court for years,” Hagood said. “It’s an honor to have him on the bench here, and he is going to be a big asset to the city of Selma.”

Hagood said Madison’s experience as a prosecutor over the last four to five years will be invaluable to the municipal court because he has dealt with the staff and many of the defendants.

As Madison took his oath, he placed his hand on the Bible, which was held by his wife of nearly 45 years, Benita. Other family members looked on in the audience with smiles on their faces. Madison said it meant a lot to him to have his family there to see him sworn in.

“I’ve got three sisters, a niece and a brother-in-law here. These people grew up with me. They know me. They’ve watched me from when I was growing up in Mobile to now,” he said. “I think some of them are honestly as excited, if not more excited, than I am just because it’s family. They’ve always been very supportive of everything I’ve done.”

Madison, originally from Mobile, has been practicing law since 1981. He served as an officer in the United States Air Force.

Municipal court is in session in Selma every Thursday and two Tuesday out of the month. During those sessions, Madison said they will come into contact with hundreds of people in the community dealing with misdemeanor charges or traffic citations.

Madison was on the bench for the first time Thursday. Instead of sitting where he normally does, he sat on the bench.

“It was different in the main sense that formerly as prosecutor I was just passing things on to the judge for him to consider,” he said. “Now, those things are being passed on to me to consider, so that is a shifting of gears so to speak legally from prosecutor to judge that I found kind of an interesting dynamic.”

Madison said he hopes to have a positive impact on the lives of people that come through municipal court.

The Bloom House is collecting prom and Easter dresses for girls in foster care. Kristen Jones, founder of the Bloom... read more