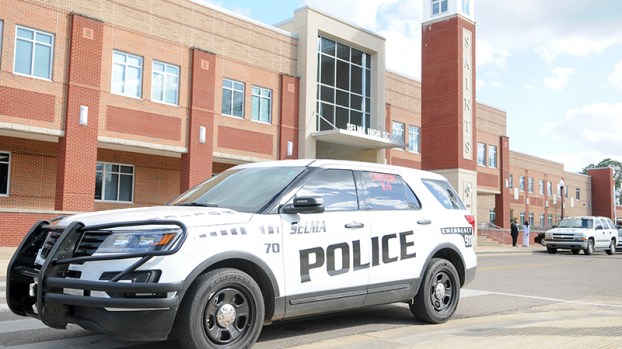 Selma High School was placed on a soft lockdown Thursday as a precaution after an alleged threat made the rounds on social media. Extra officers from the Selma Police Department were on campus to ensure the safety of the students. (Blake Deshazo | Times-Journal)

Schools in both the Dallas County and Selma school systems are taking steps to ensure student safety with increased security presence at certain locations and updated school safety plans.

In lieu of the school shootings in Parkland, Florida, earlier last week, and after multiple schools in various states have increased their security in response to social media threats, both school systems have decided to take a look at their own security plans and make sure the students feel they are in a safe learning environment.

While the threats on social media do not concern any school in the Selma or Dallas County area, it has become apparent that those in charge of the kids’ well-being are not taking anything lightly.

According to Capt. Mike Granthum with the Dallas County Sheriff’s Department, security has been tripled at schools such as Southside High and Dallas County, with all on-duty officers operating out of Southside as their home base for the day Thursday. They also had off-duty officers and plain clothes officers maintain a presence around the schools as well.

In the case of the Parkland shooting, there are multiple shortcomings with law enforcement that have come to light in the following days, such as the FBI ignoring tips received on the shooter, and the school’s security footage operating on a 20-minute delay.

Knowing all this, Granthum and school officials are working to fine-tune a safety plan while not treating any threat as a joke.

“We look at each and every threat. This is not something we take lightly. People love to copycat crimes, and we do not want that to happen here,” Granthum said. “There is no such thing as overreacting anymore. The days of being embarrassed that there are police officers at your school are over.”

With Dallas County taking the initiative to increase their presence with the students, superintendent of Selma City Schools Dr. Avis Williams is looking at a myriad of options as well.

While the county implemented additional security, Selma High School went on “soft lockdown” in response to the growing social media concern. There were also several Selma police officers on campus.

After the shootings and growing concern in the area over the social media threats, Williams has been working to guarantee effective communication between the multitude of parties involved in the safety of Selma’s school children.

Williams reached out to the parents of the students, plans on updating the school safety guidelines and is confident that each school has a legitimate emergency contact list that they have access to.

Also stressing the importance of communication, the Dallas County Sheriff’s Department is working with Dallas County Superintendent Hattie Shelton to give them detailed maps of the schools, giving law enforcement a more vivid picture of the pros and cons of each location.

Other more combative security measures could be implemented as well. According to Williams, they are going to move ahead with educating teachers and staff members in active shooter training. Williams says they do not yet know the volume of teachers receiving this training, but it could be a select few or could be all of them. Working with the school systems’ director of operations, Williams plans on integrating the initiative this spring.

“This is not new training, but I think it would help the teachers feel confident to know what to do in the event of something tragic happening. Student safety is number one,” Williams said. “Everyone would likely receive the training, but we may do it in phases.”

While lawmakers at the national, state and local level work to try to find ways to stymie the threat of school violence, debates have been sparked over the necessity of armed shooter training for teachers and other entities, such as churches.

With incidents such as the 2015 church shooting in Charleston, South Carolina, Grantham has expanded his efforts to teaching churches how to properly defend themselves and handle a gun if they choose the armed defense route.

Granthum does not personally condone these churches to arm themselves, but believes that they need to know the right way since many churches are following suit with armed defense. Granthum remarks how this is a different time for American citizens’ sense of security, as perpetrators are choosing to attack “soft targets,” which are targets that are known to not have armed resistance.

“These guys are cowards for attacking these areas, because they know there won’t be anyone there to stop them,” Granthum said.

“I have been in law enforcement for 25 years, and I never once thought I would be going to churches and talking to them about gun safety.”

Although the concern continues to grow nationwide, both Granthum and Williams are confident that the steps their teams are taking will lead to a more secure community. They both have been taking ample time to speak to anyone with concern over the matter, using their efforts to ensure safety and peace of mind for parents, kids, principals and teachers.

Concordia College Alabama to close at end of spring semester

Concordia College Alabama, a historically black Lutheran college, will close its doors and cease operations at the end of the... read more