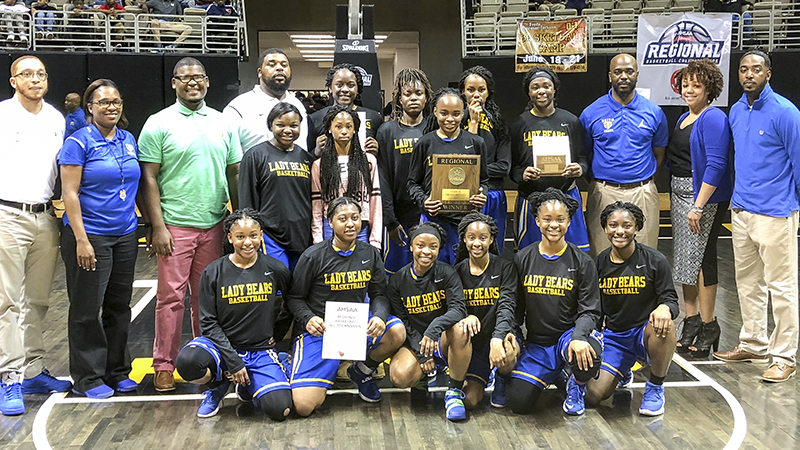 Keith’s girls basketball team received a plaque to honor their Class 2A region finals win over R.C. Hatch on Thursday morning. The Lady Bears defeated Hatch 52-38, and advanced to the Final Four in Birmingham.

The Keith High School Lady Bears defeated the R.C. Hatch Lady Bobcats 52-38 in the AHSAA Class 2A regional final game at the Dunn-Oliver Acadome at Alabama State University in Montgomery on Thursday morning to advance to the Final Four in Birmingham.

“I’m very proud,” Williams said. “We’ve played them four times this year. It all comes to who wants it in the second half. It’s been that way every game this year.”

In the fourth meeting between the two teams, the Lady Bears got their third win against the Lady Bobcats this season. Not only are the two schools less than 15 miles from each other, but Lady Bears head coach Cecil Williams played basketball and graduated from R.C. Hatch.

Williams, who usually keeps a calm demeanor on the sidelines, was the most animated he’s been all season long. The stakes were high and playing against a familiar opponent added even more emotion to the game.

Keith guard, and all-tournament selection, Jakyra Simmons made the first shot of the game with a 3-pointer to get the offense started.

“It felt good to know that I made my first shot,” Simmons said. “If I got open, I was going to shoot it again.”

The Lady Bears and the Lady Bobcats played the first half tightly, as neither team could pull away.

Keith was attacking the basket inside, while the Lady Bobcats made three first half 3-pointers to keep the game close.

R.C. Hatch led 23-22 at halftime, but the second half was a different ball game.

“I told them at halftime that if we don’t play these next 16 minutes, that’s the end of our season,” Williams said. “It all comes down to who’s going to want it more. That’s what it boiled down to, and we went harder for it.”

The spark in the offense was led by region tournament MVP Shatavia Moore, who was a scoring machine for the Lady Bears.

Her jump shot was falling and she able to get most of her points driving inside the paint. She nearly completed the double-double with 24 points and nine rebounds.

In the third quarter, the Lady Bears shot 57 percent from the field. The girls had a 38-29 lead going into the final period and didn’t let the Lady Bobcats get any closer.

The Lady Bears have earned a trip back to Birmingham to compete in the Final Four.

“We’re going for it,” Williams said. “It’s two games left, so we might as well play in all of them.”

The girls didn’t make it to Birmingham last season, but there is playoff experience on the roster. The girls are excited to have extended their season, and are motivated to go all the way.

“I feel like we proved a lot of people wrong,” Pettway said. “People thought we weren’t going to make it this far, and we did.”