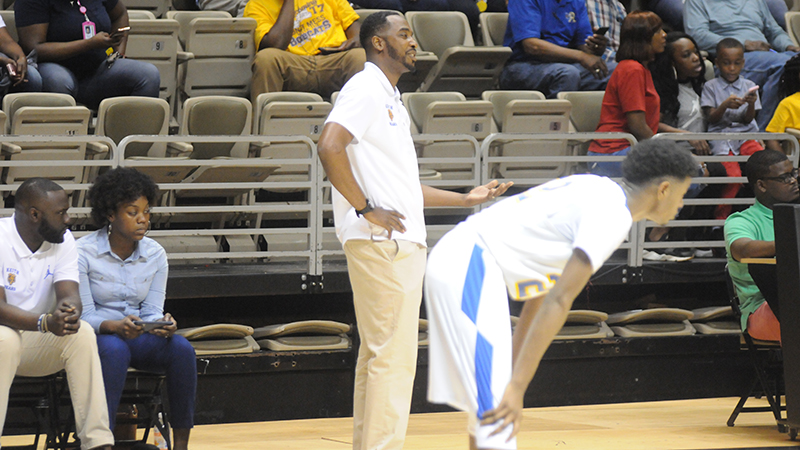 Keith head coach Clifton Reeves questions a foul call in the boys 51-32 loss to Aliceville in the region finals on Thursday morning.

The Keith boys’ playoff run came to an end Thursday morning after a 51-32 loss to Aliceville in the AHSAA Class 2A regional finals at the Dunn-Oliver Acadome at Alabama State University in Montgomery.

“I’m proud of my guys,” Keith head coach Clifton Reeves said. “I think we’ve overachieved in a lot of areas where people had doubts coming in this year, but overall it’s been a good season. Any time you play to be one of the eight final teams in 2A, you can hang your hat on that being a successful season.”

Aliceville led the season series against Keith 2-1 entering the Elite Eight matchup, and the Bears were unable to even the score in their biggest game of the season.

The matchup between two familiar teams got off to a slow start for both teams. Both teams ended the first quarter with just six points each. Aliceville shot 6.7 percent on 15 attempts in the first quarter, while Keith only made two field goals.

“It was an emotional game because it’s hard when you play four times,” Reeves said. “They know your tendencies. You know their tendencies. We was in the game pretty good in the first quarter, but it got away from us in that second quarter.”

“It’s no surprise to us that they could shoot the basketball,” Reeves said. “They just made some good baskets. We fought back, but just couldn’t get over the hump.”

The Bears defense stepped up after halftime and limited Aliceville to just four points in the third quarter. But their aggressiveness came at a cost. Arayvion Jones, Kendarius Perry and Ty’Quarius Murray all got into foul trouble. Aliceville had 22 free throw attempts in the game compared to Keith’s seven. The extra points from the free throw line kept Keith from being able to sustain a rally.

The Bears had cut the lead down to 36-30 with 5:35 left in the fourth quarter. But after the timeout, Keith’s leading scorer Jones fouled out of the game. Murray fouled out a minute later, followed by Perry.

Aliceville continued to pad their lead with three of Keith’s key players unable to return to the game.

The Yellow Jackets had three players score in double-digits, including a double-double by their leading scorer Jaquan Lee who had 15 points and 10 rebounds.

Reeves was proud of what his team accomplished this season. Keith had three players represent the team on the all-tournament team in Jones, Murray and Tyre Webster.

Boys and girls basketball teams one game away from…