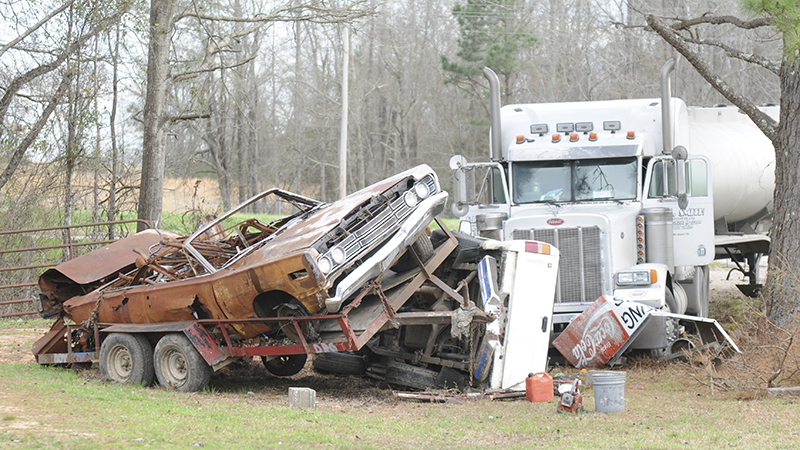 A tanker truck rear-ended a pickup truck pulling a trailer with a car on it Monday afternoon on U.S. Highway 80 West. (Blake Deshazo | Times-Journal)

According to members of the Tyler Volunteer Fire Department, a tanker truck rear-ended a pickup truck pulling a rusted-out Mercury on a trailer.  One member said there were no tail lights on the back of the trailer, so the tanker had no warning when the driver of the pickup truck decided to turn off of the highway.

The tanker appeared to rear-end the trailer, knocking it and the truck pulling it off of the roadway. The pickup flipped onto its side. According to one member of the Tyler Volunteer Fire Department, three men in the pickup truck were able to walk away on their own, but they were transported by ambulance with minor injuries.

An Alabama State Trooper also responded to the crash but could not release any details at the time. The pickup truck had an Alabama tag. The tanker truck had an Oklahoma tag and was from R.L. Smith Trucking in Pine Bluff, Arkansas. A member of the volunteer fire department said the driver of the tanker told them the tank was not full at the time of the accident. Alabama State Troopers had not released any information on the accident by deadline Monday.