Morgan Academy battles back twice, but loses in extra innings 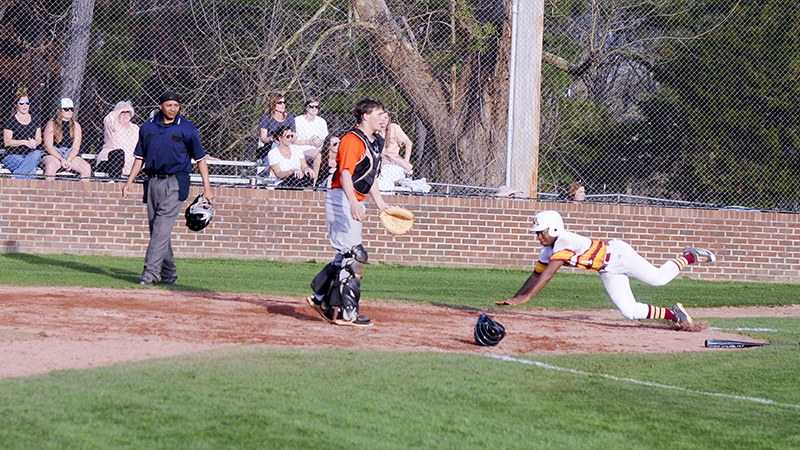 Morgan Academy’s Xavier Green slides headfirst into home to tie the game 4-4 in the bottom of the seventh inning against Clarke Prep. The Senators lost 8-5 in extra innings on Monday night to Clarke Prep.

The Morgan Academy Senators (3-2) forced extra-innings against Clarke Prep on Monday afternoon at Senator Field, but were defeated 8-5 after giving up four runs in the top of the eighth.

“I was proud of the way they battled at the end, but we’ve got to get a sense of urgency about us,” Morgan Academy head baseball coach Seth Currie said. “Early in the game, we were getting ourselves out at the plate. We still aren’t quite where we want to be.”

The Senators trailed 4-3 with two outs against them in the bottom of the seventh inning. However, the game wasn’t over yet. Sophomore Xavier Green reached first base on a two-out single to extend the game, and junior Brayton Brown laced an RBI double to the wall in right-center field to tie the game. Clarke Prep ended the inning on the next batter to prevent Morgan from getting the walk-off win.

“We’re trying to score that run to get us into extra innings, and Xavier did a good job getting on first for us,” Currie said. “We had Brayton at the plate and he’s a big stick in our lineup. He did what a good hitter does. He got a pitch he could handle and drove it to the gap.”

“That’s exactly what we want out of Dione,” Currie said. “His job is to be that bridge to get us into a place where we can be three outs away. Dione did a great job for us on the mound.”

After the leadoff single, the Senators committed an error on bunt coverage which set Clarke Prep up with runners on first and third with nobody out. Peyton Egbert walked the next hitter, and then a single found a gap on the right side to break the tie. Clarke Prep scored three more runs off a walk, single and a passed ball before Morgan Academy could stop the bleeding.

“We were scratching four outs at that time,” Currie said.

The Senators last chance came in the bottom of the eight needing three runs to tie and a fourth to win. Outfielder Sam Plummer got the rally started with a leadoff double. Allen came to the plate after a groundout, and moved Plummer to third base with a single into left field. He tried to make a play on the bases, but Allen was caught stealing for the second out.

On the next play, Matthew Davis reached first safely on an error by the shortstop, which also allowed Plummer to score. Morgan Academy still needed three more runs to continue the rally.

Britton Adams followed Davis with a single and gave Green an opportunity to keep it going with two outs and the tying run at the plate.

On a full-count, Green stroked a high fly ball to deep centerfield, but the Clarke Prep outfielder had enough room to make the catch and end the game.

“We put ourselves in a position to win in extra innings,” Currie said. “But that’s just baseball.”