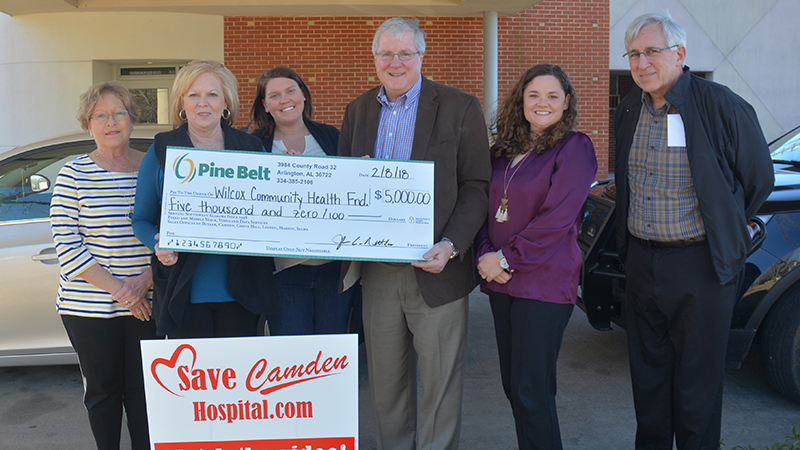 Local internet and phone service provider Pine Belt Wireless is stepping up to do their part in keeping a Camden hospital open.

After learning about the hard times the hospital is experiencing, President John Nettles and his Pine Belt team got to work to contribute towards the longevity of J. Paul Jones Hospital through a financial contribution of $5,000 and showing support on various social media platforms.

Social media tactics included awareness campaigns on both Twitter and Facebook, and a GoFundMe page with the title and hashtag “#pinebeltcares” began to take in donations.

The check given by Pine Belt for the hospital’s continued operations was made out to the Wilcox County Health Foundation. According to chairperson Elizabeth Reaves, the GoFundMe page started by Pine Belt also raised more than $2,000.

The connection between Pine Belt and the medical center dates back to before Nettles’ time when his father, Buddy, was in charge. Buddy is the founder of both Pine Belt Wireless and J. Paul Jones Hospital.

Sales and marketing director of Pine Belt, Kevin Grass, says that the long-standing ties between Pine Belt and the community hospital is what drove them to move forward with assistance without a moment’s hesitation.

“There was never a question on our end. We were sure we were going to do this,” Grass said. “Pine Belt is very committed to all counties and communities that we serve. We want to help them thrive and excel, so pitching in comes naturally to us.”

The efforts made on behalf of Pine Belt would not have been possible without the work of two groups: the WCHF and “Friends of J. Paul Jones,” a local advocacy group.

Serving as chairperson of the WCHF and the creator of Friends of J. Paul Jones is Reaves, who has dedicated countless hours towards keeping the hospital up and running.

Reaves first learned about the hospital’s imminent expiration back in August of 2017, when it was announced that the end of 2017 would also be the end of J. Paul Jones.

Understanding the vital role rural hospitals play in the standard of health for local residents, Reaves and J. Paul Jones’ director, Libby Kennedy, began thinking of creative ways to help find a temporary fix until a permanent solution could be found.

“We started a grassroots effort once we realized we were going to lose our hospital. We need it and a lot of people take it for granted,” Reaves said. “I am just trying to keep the lights on and the doctors in the building.”

Committed to keeping the hospital up and running, Reaves reached out to local businesses such as Pine Belt, began YouTube campaigns to raise awareness, went on local radio, hosted yard sale campaigns and a New Year’s Eve fundraiser dinner.

While all of these may be temporary solutions to the problem, Reaves and Pine Belt’s efforts have kept the hospital going two months into 2018, when it was originally thought the hospital would have been vacated by now.

According to Reaves, the main issues associated with J. Paul Jones Hospital come from two factors. Insurance and reimbursement rates given to smaller rural hospitals are often less attractive than those given to hospitals located in bigger cities. Furthermore, Medicaid and Medicare coverage has also created an issue. Despite the old age and low income of the surrounding areas, many clients of the hospital do not have coverage, making payment complicated.

With health coverage for the Wilcox County area already struggling to keep up with the needs of the residents, keeping a local hospital running is of utmost importance in the mind of Reaves.

“A person can either drive 60 miles out of the way or can just go to J. Paul Jones in Camden. A lot of people do not have transportation and need local access,” Reaves said. “My husband is a farmer, and accidents happen all the time. The local hospital saved his life once.”

Long-term solutions are in the process of implementation, such as J. Paul Jones’ newest partnership with UAB. With this partnership, the hospital will display UAB’s logo and will be eligible to better insurance reimbursement rates, thanks to UAB’s prestigious reputation in the health field.

Due to the efforts of Reaves’ fundraising, Pine Belt’s contributions and other local businesses’ donations, around $30,000 has been raised to help keep the hospital functioning. This does not include donations made privately straight to the hospital.

According to Reaves, plans are in motion for a Kentucky Derby-themed fundraiser and watching party for the race in early May. United States Rep. Terri Sewell continues to work at the state and national level to provide long-term solutions to rural hospitals, including J. Paul Jones.